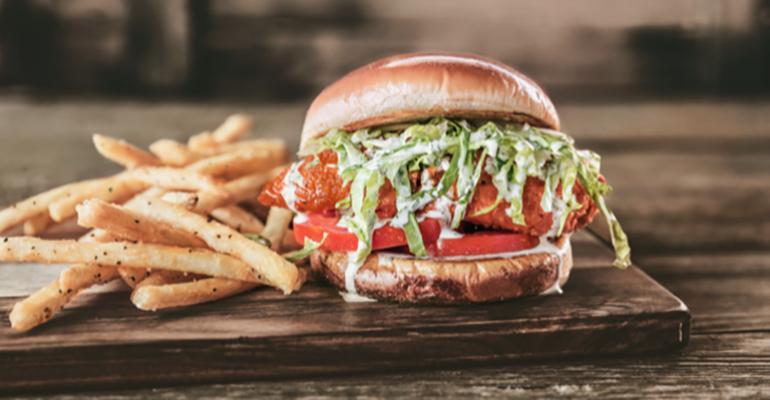 From wings to handhelds, here’s how the spicy favorite is showing up in new ways on menus

If Buffalo sauce were merely an accompaniment for chicken wings, its long-running popularity would be remarkable enough. The condiment, which was created in a bar in Buffalo, N.Y. in the 1960s, turned underutilized chicken parts into one of the most popular appetizers, bar bites and snacks of all time. The National Chicken Council reported that Americans consumed nearly one billion servings of wings last year and estimates that wing consumption will grow by 2% this year.

But its influence goes far beyond its origins. Buffalo sauce became a staple on chain menus over two decades ago, as adventurous diners experimented with assertive flavors. Its homegrown approachability and use of butter to round and balance out the heat lured spice-phobes and served as a gateway to emerging global flavors. Thanks to the COVID-19 shutdown, it has gotten a new lease on life as delivery-friendly chicken wing sales have taken off like a rocket, and corporate chefs have rediscovered its patron-pleasing versatility in a broad range of new dishes.

The sauce also makes cross-cultural appearances on items like Papa John’s Grilled Buffalo Chicken Papadia. The item, which resembles the offspring of a calzone and a piadina, is touted as a less messy, easier-to-eat alternative to conventional wings. 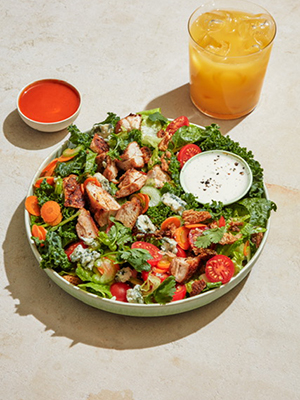 Pasta and pizza. Menu researchers at Datassential report that the use of protein as a topper for mac and cheese, as with the Buffalo chicken mac at Noodles & Company, has increased 83% in the past four years.

Romano’s Macaroni Grill jumped on the trend with their Buffalo chicken parmesan, a limited-time special this summer that topped the traditional pounded-and-breaded breast with melted mozzarella and the titular sauce. It was served over capellini pasta.

Virtually all pizza chains both large and small serve a Buffalo-accented pie. Among the majors, Papa John’s turns the heat way up with Fiery Buffalo Chicken option, while competitor Pizza Hut claims its Buffalo Chicken Pizza “tastes like a football game feels.” Meanwhile, high-flying Domino’s announced a new-and-improved Buffalo sauce for its pizzas, wings and sandwiches.

Pie Five, the Texas-based pioneer of the fast-casual pizza segment, serves a Buffalo Chicken Pizza with unconventional touches like cheddar cheese and banana peppers, while the Southern Heat Pizza from Your Pie, a regional fast-casual player based in Athens, Ga., lives up to its name with Buffalo sauce, jalapeños and red onions.

And more wings. The item that started it all continues to sizzle.  It’s Just Wings, the virtual delivery concept launched by Chili’s Grill & Bar in June, is on course to realize a hefty $150 million in sales in its first year; the company says that of the 11 sauces on offer, Buffalo is number one. Chuck E. Cheese’s units have been cooking up Pasqually’s Pizza & Wings in their kitchens, and in early results, the delivery-only concept reports that pepperoni pizza and Buffalo wings are its top sellers.