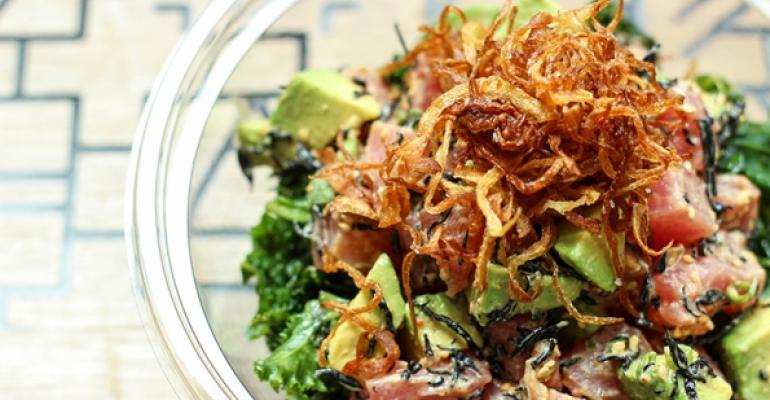 Armed with some deeply knowledgeable investors, Sweetfin Poké is ramping up growth, with five units scheduled to open in the Los Angeles area this year, the company said last week.

Former Shake Shack CEO David Swinghamer, a founding partner of Union Square Hospitality Group in New York, and longtime industry veteran Larry Mindel, a founder of the Il Fornaio chain and other restaurant concepts, have invested in the latest round of financing for Sweetfin, taking a minority stake in the concept and serving as advisors, said Seth Cohen, Sweetfin co-founder.

Terms were not disclosed, but the investment sets the stage for the expansion of the fast-casual poke concept, which debuted in April 2015 in Santa Monica, Calif., with a menu based on the style of healthful raw fish bowls found on virtually every street corner in Hawaii. The trend has traveled to Los Angeles, where a number of poke chains have emerged with plans to grow.

Cohen said the concept of poke strikes a chord with sushi lovers, making similar flavors and ingredients more accessible for a quick lunch or dinner.

“In LA specifically, sushi is so ubiquitous,” Cohen said. “We took a lot of the familiar flavors of sushi and put it into an accessible bowl. It’s a great alternative for those who don’t want to sit down for a $40 to $50 sushi meal, and you’re satisfying the same craving.”

Sweetfin’s 1,000-square-foot first location in Santa Monica is expected to see roughly $3 million in sales in its first year, he said. Because of the physical limitations of the small kitchen, the unit can’t yet offer delivery or phone orders, so future locations that can handle more volume may have higher revenue potential.

Cohen created the concept with partners Alan Nathan, former owner of the casual-dining sushi restaurant Tengu in Los Angeles, and Brett Nestadt, who comes from the entertainment industry and has a background in marketing and branding.

Also on board is chef Dakota Weiss, a “Top Chef” alum and chef at the Los Angeles restaurant Estrella, who developed the menu.

Sweetfin offers a line of signature bowls based on albacore or yellowfin tuna, salmon or snapper over a base of bamboo rice or kelp noodle-cucumber slaw. Sauces include options like creamy togarashi, yuzu kosho or sriracha ponzu.

For vegans or those avoiding raw fish, bowls can be built around tofu or vegetables, and the entire menu is dairy-free and gluten-free.

Dishes are also fully customizable, allowing customers to build their own combination of fish, vegetables and sauces, or select from various add-ons like avocado, seaweed or jalapeno, which can also be added to signature bowls.

Small bowls are priced at around $9, and large bowls at around $13 to $14, for an average check of about $13 with drink, which Cohen said competes with more premium fast-casual players like Tender Greens or Sweetgreen.

“It’s definitely a healthful option,” Cohen said. “It’s an alternative to going to a salad or sandwich concept for lunch or dinner.”

Three more units are under construction. The next restaurant is scheduled to open in April in Los Angeles’ Westwood neighborhood. In May, units are scheduled to open in Larchmont Village and Topanga Canyon. Two more locations are expected to open this year in the L.A. area, although the exact spots have not yet been disclosed, Cohen said.

The footprint of future restaurants is likely to be between 1,200 square feet and 1,400 square feet, but the Larchmont Village location will focus on takeout and grab-and-go options in only 680 square feet.

Cohen said there are no plans to franchise at this point, and growth will focus initially on California. But he said the chain could go national in time, in the same way sushi has become popular across the country.

“Fifteen years ago, when my partner started Tengu, they had to teach their customers what sashimi was. Now we have kids coming in for bowls of poke and loving it,” Cohen said. “Sushi is as much a part of the American diet as pizza, so the demand for poke, which we feel is a more accessible way to eat sushi, is not a trend, but is here to stay.”