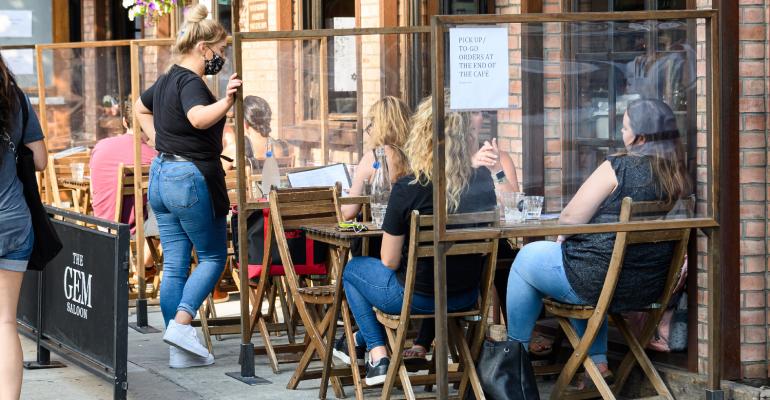 Restaurant sales improved again in August. But even though August’s same-store sales growth is the best result for the industry since February, it revealed a slowdown in the pace of restaurant recovery. This latest Black Box Intelligence™ data suggests that in upcoming months, and likely into 2021, the recovery will continue to look more like a sluggish climb instead of the rebound to pre-coronavirus sales levels we’d all like to see.

Although the economy is recovering, millions of people remain unemployed, extended government relief packages are still up in the air, and consumer confidence continues to be extremely low. This combination of factors supports the notion that restaurant sales are not going to fully recover for quite some time. At least, not until these obstacles are eliminated.

The current uncertainty caused by this unique environment is reflected in the latest guest-sentiment numbers from Black Box Guest Intelligence™. Despite the improvement in sales, guest intent-to-return sentiment indicates consumers are cautious and not ready to go back to restaurants at the same pace as before, even if they are having positive experiences when interacting with restaurants.

Guest sentiment improved in August year-over-year based on restaurant food, beverages and ambiance. In the case of service, though faced with the many challenges of providing a good experience in the middle of a pandemic while juggling the heightened health and cleanliness concerns, restaurants have managed to keep their sentiment less than one percentage point lower than it was in August of 2019 – not a small feat by any means in this environment.

The only other area, besides intent to return, in which guest sentiment dropped in August was value. Restaurant average guest checks have been growing at an accelerated pace year-over-year since the beginning of the pandemic. Guests are noticing and letting their online voices be heard about it.

Not surprisingly, service net sentiment in full-service restaurants dropped rapidly during the first months of the pandemic. At that point, restaurant operations focused almost exclusively on off-premise and the restaurant experience got relegated to curbside pickups and delivery. Naturally, more important concerns in light of the crisis, such as cleanliness and safety, took center stage in the mind of guests. But service sentiment has steadily been improving since then as dining rooms continue to open.

An important finding regarding these service scores is the gaps that exist at different levels of sales performance. In the case of top-performing full-service restaurant companies, the 25% with the best same-store sales results during July and August, service net sentiment improved by 19 percentage points compared to their Q2 scores. Though also improving service sentiment, in the case of bottom-performing companies (those with the lowest 25% of same-store sales growth) their service net sentiment improved by only 12 percentage points in July and August compared to their Q2 scores. In other words, those restaurant companies that are experiencing smaller losses in sales seem to have made the adjustments required by the new environment to allow for quicker improvements in their service perception by guests.

Black Box Intelligence research in recent months has highlighted the improvement in ambiance scores driven mainly because an improvement in cleanliness scores. At the industry level, both sales and ambiance sentiment have improved. But what is the relationship at the brand level between sales performance and cleanliness perception? And does cleanliness have the same impact on sales for full-service and limited-service restaurants?

By July, when dine-in operations were allowed for the vast majority of the country, the data showed that those restaurant brands in the top 25% of same-store sales performance had better cleanliness scores that those that were in the bottom 25% of sales. Furthermore, although this relationship held for both full-service and limited-service restaurants, the gap in performance was much higher in full-service. While top-performing limited-service brands based on sales had cleanliness scores that were 2 percentage points better than those with the worst sales growth rates, the gap in cleanliness scores between top and bottom performers in full service was a much larger 8 points.

Given the nature of the restaurant experience when dining in at a full-service restaurant compared to the typical limited-service interaction, which more often than not is through a drive-thru window or picking up food to go, guests ascribing a larger premium to cleanliness scores in top performers in full-service makes sense. Cleanliness is undoubtedly important, today more than ever, but guests seems to think it is even more important when sitting down inside a dining room for an extended period.

Of the 25 largest markets in the country, the four that improved their restaurant same-store sales the most in August compared to July’s performance were New York, Philadelphia, Phoenix and San Francisco. Three of those are well-represented as leading the country in terms of highest guest sentiment for each of the attributes of the restaurant experience.

In the case of Phoenix, not only is it one of the DMAs that improved its performance the most, but it is also one of only nine of those 25 major markets that had same-store sales growth better than -10% during August. Restaurants in Phoenix seem to have been successful in meeting guest expectations and this superior sentiment appears to be rewarded with better sales. Guests in Phoenix had the highest sentiment based on the key attributes of service and intent to return, as well as beverages.

San Francisco was the major market with the highest guest sentiment based on ambiance. In recent months, improvements in ambiance have been driven by improvements in cleanliness scores, and thus it is now considered to be a key attribute guests are considering when making their dining decisions. Philadelphia was the major DMA with best net sentiment scores based on restaurant value.

On the other hand, things are not boding well for Cleveland. Of the only four major markets in the country that saw their same-store sales worsen during August compared to July’s year-over-year growth, Cleveland was the one that suffered the largest loss in sales growth during the month. Meanwhile, guests in this market expressed the lowest intent-to-return sentiment during August. Unmet guest expectations there could spell continued difficulties in weeks ahead for those restaurant companies operating in Cleveland.

Sales impacted by cleanliness and service

Restaurants with better sales results seem to be managing service expectations rather well, especially considering the current landscape. Challenges for operators abound, but those who remain vigilant about maintaining consistency in their restaurants, especially in regard to cleanliness and service, will continue to receive online praise and support from their guests, and much needed incremental sales.

The Restaurant Guest Satisfaction Snapshot is produced by data from Guest Intelligence™, a Black Box Intelligence Product™. Guest Intelligence is tracking over 192 brands to benchmark customer satisfaction and is the only online tool that integrates with operational performance data to validate the impact on financial performance. The algorithm determining ranking brands is based on sentiment and determined by Black Box Guest Intelligence. Brands included in this monthly snapshot must have a total of at least 250 mentions for the month. Restaurants must have a minimum number of units to be eligible as well. DMA rankings consider only the largest 25 areas.