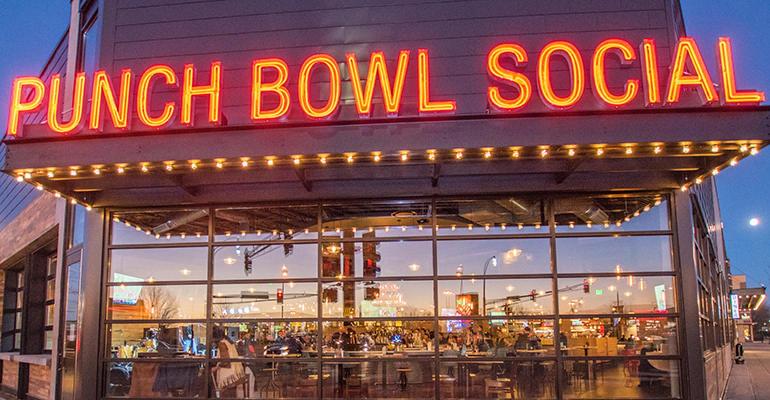 The three units that are still open will close

“Eatertainment” concept Punch Bowl Social filed for Chapter 11 bankruptcy protection in the District of Delaware on Monday, blaming operating restrictions related to the pandemic, according to court documents.

No trustee, examiner or creditors’ committees have been appointed.

Once with 18 locations, the Denver-based company had permanently closed four units by August, and only three remained open, in Denver, Cleveland and Atlanta, at the time of the bankruptcy filing.

Related: Cracker Barrel will not continue to invest in Punch Bowl Social after the emerging brand was temporarily forced to close units and faces foreclosure due to coronavirus

“Unfortunately, because of restrictions limiting the number of patrons at each venue, as well as the public’s uneasiness of going out to eat or drink in public during a pandemic, each of those venues was losing money on a daily basis,” the company said in the bankruptcy filing. “The Debtors have determined that, in light of the need to preserve cash during these Chapter 11 bankruptcy cases, the Debtors are closing all of the remaining venues effective immediately.”

The filing put Punch Bowl Social’s debts at around $15 million.

The restaurant chain’s senior secured lender, CrowdOut Capital, had pledged continuing support for Punch Bowl as recently as August. Its CEO, Alexander Schoenbaum, said he had no comment on the bankruptcy filing.

Punch Bowl Social has been on shaky financial ground since the pandemic started. In late March, Cracker Barrel Old Country Store, which had taken a minority stake in the concept in July of 2019, said it would not continue to invest in the brand.