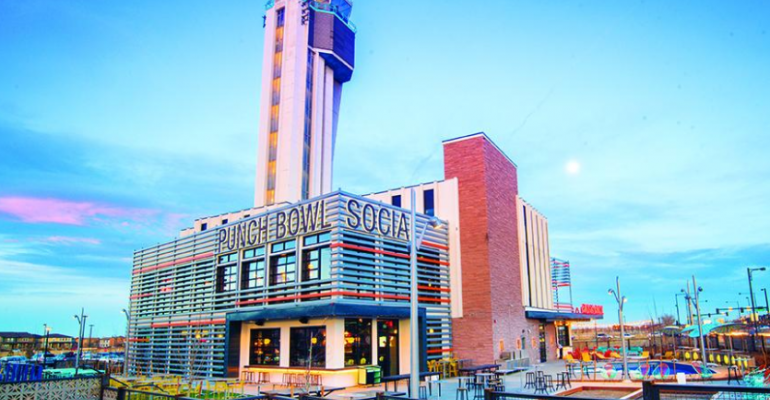 Punch Bowl Social
Punch Bowl Social founder and CEO resigns and predicts company will likely go up for sale. To date, the company has permanently closed four locations during the pandemic.
News>Casual Dining

Thompson exits to pursue development of projects geared towards Millennials and Gen Z; Punch Bowl has permanently closed four locations during the coronavirus pandemic; ‘Someone is going to buy this company through some type of asset cleanse,’ Thompson says

Punch Bowl Social’s CEO and founder Robert Thompson has resigned from the “eatertainment” concept, which has struggled amid restrictions to curb the spread of coronavirus, prompting the Denver-based company to permanently close four locations.

Thompson told Nation’s Restaurant News that he is leaving the company he founded to form an incubator holding company that will focus on building projects geared towards Millennials and Gen Z.

“Ultimately COVID was the catalyst here,” he said during a phone interview early Thursday. “I'm going to take it as a sign from the universe that I was supposed to look at new opportunities because six months ago, I never would have considered the decision that I'm making right now.”

To date, four restaurants have permanently closed, leaving the company with 14 locations. At the onset of the crisis, Cracker Barrel Country Old Country Store Inc. announced that the company would be divesting from Punch Bowl Social. The about-face came less than a year after Cracker Barrel announced its acquisition of a $140 million non-controlling stake of Punch Bowl Social in July 2019.

Punch Bowl did not name a successor for Thompson, who also resigned from Punch Bowl’s board effective Wednesday.

He remains a shareholder, but does not plan to take part in the brand’s next strategic moves, which could include a sale.

“It’s worth noting that someone is going to buy this company through some type of asset cleanse or whether it’s foreclosure or something else,” he said.

Over the years, Punch Bowl Social, a 2018 NRN Hot Concept, has made a name for itself with its huge, high-energy spaces. But the restaurant-arcade hybrid was hit hard during the pandemic. The big-box casual-dining chain features a variety of games — Skee-Ball, shuffleboard, bowling, ping-pong — as well as eclectic decor that blends Victorian, mountain lodge and mid-century modern influences.

About 30% to 40% of its revenue was generated by large parties, making it difficult to navigate a crisis where phyiscal distancing is required. During the peak of the pandemic, all locations were closed temporarily. In June, Punch Bowl Social permanently closed two restaurants — one in Stapleton, Colo. and one in Schaumburg, Ill. Since that time, the company has shuttered locations in Salt Lake City, Utah and Miami.

“Deals just could not be struck with those landlords,” Thompson said.

Three restaurants in Denver, Cleveland and Atlanta have reopened.

The CEO of CrowdOut Capital, Punch Bowl Social’s senior lender, said the firm wishes  Thompson all the best in his "future endeavors" and thanked him for his years of tireless work.

"He created an incredible brand in Punch Bowl Social," Alexander Schoenbaum said in a statement sent to NRN. "CrowdOut remains committed to Robert’s goal of staying at the forefront of the 'eatertainment movement' and will continue to support Punch Bowl Social, as we have throughout the global pandemic and the ongoing reopening of locations."

Updated: This developing story has been updated throughout the day.