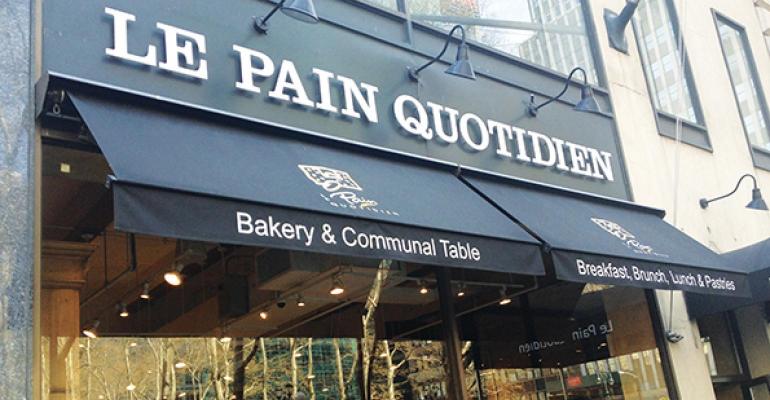 The parent of Le Pain Quotidien on Wednesday has agreed to sell its U.S. locations for $3 million.
News>Fast Casual

All 98 domestic units of the bakery-cafe chain closed in coronavirus pandemic, but Aurify plans to reopen 35 locations

The parent of Le Pain Quotidien on Wednesday agreed to sell its U.S. locations of the bakery-cafe chain to New York-based multiconcept operator Aurify Brands LLC for about $3 million.

The agreement came as PQ New York Inc., operator of 98 Le Pain Quotidien restaurants across the U.S. before the pandemic, filed for Chapter 11 reorganization.

As part of the filing, PQ NY requested approval for the asset purchase agreement with Aurify, which has committed to provide the cash portion of the purchase price upfront in the form of debtor-in-possession financing. The agreement is subject to court approval.

Belgium-based Le Pain Quotidien was struggling even before the pandemic, moving recently to spin off both its American and British subsidiaries to avoid liquidation. At its peak, the chain operated nearly 300 units worldwide.

According to The Brussels Times, the British operation of the chain has been unable to find a buyer and has gone into administration, which in Europe means the company is under management of an administrator as it works out protection from creditors.

Remaining in Belgium is a holding company, renamed Brunchoco21, will include Le Pain Quotidien Belgium and France, with a production facility, branding rights and contracts for the American and British operations. Majority ownership will be held by investment firm M80, which reportedly has plans to relaunch the brand in Europe.

In the U.S., PQ NY blamed a sales decline in recent years on increased competition, a lack of investment in digital platforms and a consumer movement toward more convenient grab-and-go concepts. The pandemic-related shutdown became a last-straw event for the chain, forcing it to close all 98 domestic locations — including restaurants in New York, Connecticut, California, Philadelphia, Washington, D.C., Virginia, Chicago and Miami — and lay off about 2,500 employees.

Presumably the remaining 63 locations would remain closed permanently, unless Aurify decides to reopen more of the Le Pain Quotidien units.

Andy Stern, Aurify's co-CEO, declined to comment on the agreement, beyond court filings.

Under the deal, Aurify will provide $522,000 in bridge financing to continue the restructuring process as part of the acquisition of assets for $3 million, plus the assumption of certain liabilities. Aurify will also assume the franchising rights to the brand in the U.S.