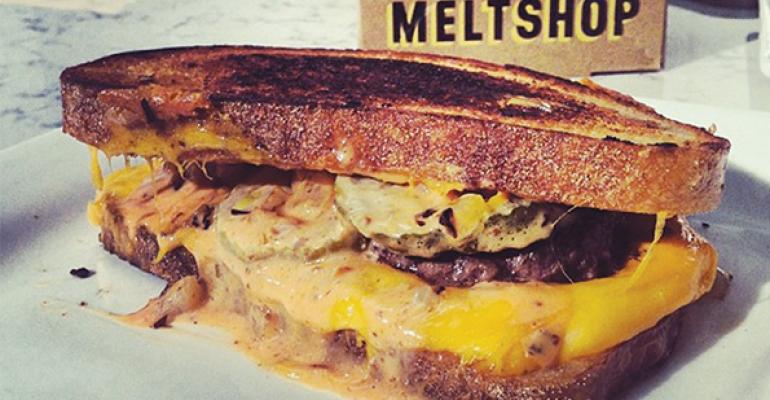 John Rigos and Andy Stern started Aurify Brands in 2010, after the New York City Five Guys franchisees decided to run their own concepts and take them national.

Five years later, the business partners are starting to fulfill that mission, and have a new funding round to pay for it.

Aurify, which operates a trio of concepts, including Melt Shop, Fields Good Chicken and The Little Beet, recently said that it received $22.5 million in Series B funding in a round led by the Topeka, Kan.-based financial and insurance firm Security Benefit Corp.

The funds will be used to help the chain open 20 new locations next year, many of which will be outside of the company’s home market of New York. This expansion would nearly double the company’s size from its current 24 locations, including 13 Five Guys restaurants.

“In 2010 we decided to develop our own brand, our own intellectual property, expand it nationally and not be confined to New York City,” Rigos said.

The company founded Melt Shop in 2011, and the chain has eight locations. It has since opened Little Beet, with five locations, and Fields Good Chicken, which will soon have three units.

The three brands are all fast-casual restaurants. Melt Shop is a gourmet sandwich shop that specializes in grilled cheese sandwiches. Little Beet is a health-focused concept. Fields Good sells locally sourced, humanely raised chicken. Aurify also has a full-service restaurant to go with Little Beet — The Little Beet Table — which has one location.

Most of the company’s restaurants are in New York City. But the chain recently opened a unit in Washington, D.C., and will soon open a second location there. It is also opening a Melt Shop in the Mall of America in Bloomington, Minn., and is working on opening in Chicago.

“They’re all doing really well,” Rigos said. “They’re leaders in their respective categories, and we want to take each brand national.”

This is the second major funding round for Aurify, which received an initial round of $22.5 million in 2013.

Rigos said that Aurify had a long relationship with Security Benefit, which funded the company in the past.

Security Benefit, for its part, has high hopes for Aurify. “Aurify Brands is looking to change the way Americans eat,” Tony Minella, Security Benefit chief investment officer, said in a statement. “John and Andy have a vision to foster great people and even greater ideas, and it’s our distinct pleasure to achieve those goals. Their year-to-year growth, innovative and accomplished staff, and overall plan for growth is remarkable, and this financing represents another significant milestone in the Aurify story.”

Aurify Brands will use the funds for unit development. It will also use the funds to support the company’s expansion. The company recently hired a new vice president of training and a new CFO, each with considerable restaurant experience.

That restaurant experience should help the company operate multiple different brands from a single company. Rigos said that Aurify is organized so that a single operating partner runs each brand. Aurify provides support services, marketing, accounting, human resources and strategy while capitalizing the businesses.

“Our operating partners are committed solely to developing the brands,” Rigos sad. “We’re working with all the brands to realize their potential.”