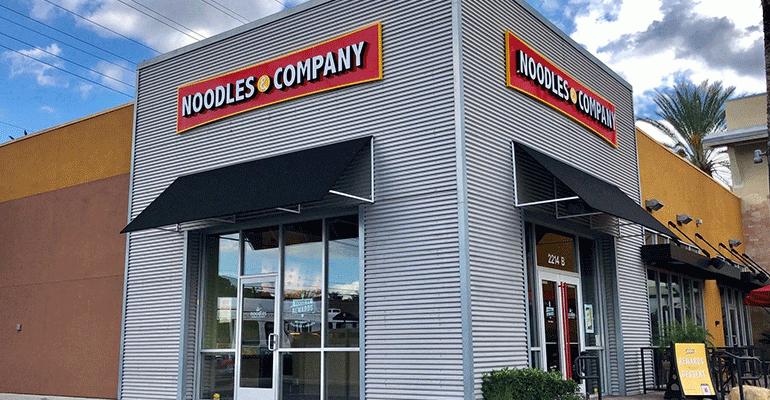 With a strong menu in place, Noodles & Company to focus on digital innovation

With a menu that already suits its customers’ needs thanks to innovation in recent years of both lighter and more indulgent items, Noodles & Company will be focusing on digital innovation in 2023, CEO Dave Boennighausen told attendees of the ICR conference on Monday.

He and chief financial officer Carl Lukach said the fast-casual chain of more than 450 restaurants in 30 states is poised to meet its goal of a $1.5 million average unit volume and 20% margins by 2024, although they were less committal about the stated goal of 10% unit growth.

Those goals are aided by high retention rates, Boennighausen said, noting that AUVs are directly correlated to a general manager’s tenure.

He said a “healthy percentage” of Noodles locations “are actually north of $2 million” in AUVs, with some as high as $2.7 million. He said nearly half of the restaurants had reached their $1.5 million goal. That’s compared to AUV’s of $1.15-$1.2 million before the pandemic.

Related: With Stuffed Tortelloni, Noodles & Company finally responded to its customers’ No. 1 request

“As a brand we’re better than we were pre-COVID, and then from an overall economic perspective and as an investment thesis I think we have a lot more tailwinds as we enter ’23,” he said.

The chain has been innovating with lower carbohydrate items such as the introduction of zucchini noodles in 2018, followed by gnocchi made partly with cauliflower. It then responded to guests’ requests for stuffed pasta with the rollout of tortelloni in 2021, followed by higher protein, lower-carb linguini, dubbed LEANguini, last year.

Boennighausen said the LEANguini has performed particularly well in markets with new digital menu boards because those boards enable the restaurants to tell the pasta’s story — that it’s made from just flour, eggs, and water but produced in such a way that it has 50% fewer carbs and 50% more protein.

Those boards also will allow operators to promote different menu items based on the market — shying away from kids’ menus in college towns, for example.

The digital menu boards are currently in around 15% of Noodles & Company locations, and Boennighausen said the rollout would be complete in the next six to nine months.

“Our ability to have digital menu boards could be a very, very big driver for us as we go forward in terms of just articulating the brand and all [its] great attributes,” he said.

That marketing approach would be more of the chain’s focus in the next year rather than new menu items, he said.

In terms of the 20% margin goal, Lukach said he’s confident that they’ll reach that given their prime costs of 25% for food and 30% of labor.

He said that they were at 18% margins a year ago, and then were hit by inflation, particularly for chicken, which just on its own caused a 300 basis-point reduction in margins. However he has locked in favorable protein prices for the rest of the year.

Additionally, he has rehired consulting firm Profitality to look at their labor model. He’d hired them in the past to examine all activity in the restaurant in one-minute increments, and they were able to trim nine work hours per week. He’s bringing them back “because the restaurant’s in a different place now. It’s off-premise, it’s a smaller square footage, there’s a lot more people doing delivery,” he said.

Another technology that Noodles is making use of is its Noodles Rewards loyalty program, which now has 4.4 million members, or around 10,000 per restaurant. Boennighausen said loyalty program members were being targeted in more personal way.

“Last week if you’d been with the brand for a while you would have seem a review, a video, similar to if you go to Spotify and they say ‘Hey, your year in review! This is what you listened to the most,” he said. Those videos used photography of dishes that the guests had ordered.

Those guests are also being alerted with information about how many rewards points they have and what they can do with them.

“We’re already starting to make a lot of progress, but I think we’re just starting to hit our stride,” Boennighausen said of the rewards program, adding that the company is investing in a customer data platform that will give them a ‘”360 view” of the guests, and he’s putting a team and infrastructure in place to allow them to personalize interactions with those guests more.

In terms of new unit growth, Boennighausen said the chain was moving slower than he’d like, but they do have three times as many leases signed for new restaurants as he did at this time last year, and he’s seeing more interest from new and existing franchisees, “but it’s been slower than we’d like.”

Construction costs have moderated a bit, he said, and landlords are making fewer one-off demands.

“We’re seeing that our standard work letter is being agreed upon more and more often than we’ve seen in the past,” he said. The result is more predictable construction costs, and ones that are more in line with expectations of a build out of around $900,000.

Noodles & Company raised prices in May of last year, including a $1 chicken surcharge, but the chain’s guests, who tend to skew higher income than at most other fast-casual chains, took it in stride, and Boennighausen said he felt that the chain had room to take more price in the coming year.