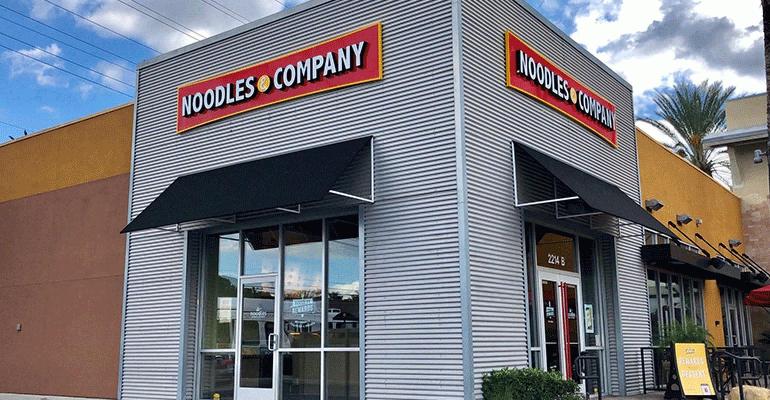 The company is coming out of Q3 with accelerated sales and improved traffic trends.

Noodles & Company generated a same-store sales increase of 3.4% in Q3. In October, that performance accelerated to 10.5% with traffic moving from down to flat. CFO Carl Lukach said he expects this momentum to continue throughout Q4 even as the company maintains a 10% price increase to offset inflation.

“Our brand is still really resonating, and our sales performance is indicative of that,” Lukach said during a phone interview Monday.

There are several factors contributing to Noodles’ momentum in recent months. First, the chain has a growing loyalty program with 4.4 million members – a 16% jump from last year.

“We really know our guests and we’re collecting data from them for every purchase and getting to know that behavior,” Lukach said. “We know our loyalty guest comes in more frequently and of those who sign up for the first time, 60% come back within 60 days. Frequency is the play here.”

Those guests have also proven they want convenience. Noodles’ digital sales remain around 50%, in fact, and delivery has “held up” despite the premium pricing attached to the channel. The value equation has also worked in Noodles’ favor as consumers continue to navigate higher prices. Noodles recently shifted its promotional messaging to focus on its 7 for $7 menu, for instance, which has generated a “tremendous response.”

“This value already exists for us, and we haven’t had to go deep into the promotional pool. This has been really resonating with our guests,” Lukach said. “And those guests are still attaching protein, which takes us from $7 to $11 or $12.”

Noodles has also experienced significant inflation relief, specifically with its chicken inventory. Over 50% of guests add chicken to their orders, and the protein has generated a material food cost with prices reaching “unprecedented levels” in Q2.

“About 13% of our cost of food is either parmesan or grilled chicken. Chicken has been an outsized inflationary pressure,” Lukach said. “We’re finally getting back to normal seasonal and cyclical for chicken prices and they’re down from their peak in May. That gives us encouragement and we expect a 200-basis-point improvement in cost of goods as we exit 2022.”

The trend should help improve margins somewhat, though they’ll remain pressured because of ongoing wage inflation. For Noodles, labor costs were nearly 31% of sales in Q3 – nearly 12% higher year-over-year. Lukach said wage inflation is moderating somewhat but will remain elevated throughout the fourth quarter and perhaps even into next year.

“Wage inflation is a big watch for us. We’re anticipating that it will normalize a bit, but the way it’s been running doesn’t feel sustainable,” he said. “If it remains high, we may have to go to pricing.”

Noodles Q3 pricing increase of 10% is expected to continue in Q4, though Lukach notes that the company had not taken any core pricing since May. This, he adds, gives the company a little bit of “head way in terms of pricing.”

“The good news is we’re fully staffed. We are fully open, which is different than where we were 12 months ago. Labor inflation is persistent, which is giving us a greater imperative to optimize our labor efficiencies,” he said.

To achieve such optimization, Noodles has tapped a third-party industrial engineering firm to study operational workflow and ideally find labor-saving opportunities. The chain has had success with this approach before, tapping the same firm in 2020 to find kitchen efficiencies that yielded about nine hours of labor savings a day. Noodles is currently testing an oven, for instance, that could potentially consolidate its current oven and grill equipment. Lukach is expecting more learnings in early 2023, including how technology plays a role in new efficiencies.

As part of that technology focus, the chain is currently in the process of rolling out digital menu boards, which Lukach said are a priority for a few reasons. First, customers expect them. Second, Noodles’ objective is to become a totally digital company, giving guests different options on how to engage with the brand. Third, the boards allow the company to be nimbler – changing promotions or pricing depending on time of day or market.

“We are supporting digital in every which way and the guest is expecting that. They want to be surprised and delighted and see something new on the menu. But we also want that flexibility to move things around. We’re in an environment where we want to be as nimble as we can with pricing dynamics,” Lukach said.

Noodles currently has about 10% of the system outfitted with digital menu boards and anticipates systemwide completion by the end of 2023.

Outside of the company’s digital and operational efforts, the crystal ball heading into next year is a little cloudy at this point, but Lukach says the chain’s sales are a strong indicator that guest behavior is holding up so far.

“They’re still attaching proteins and there are no major changes in discretionary purchases,” Lukach said. “We’re watching very carefully guest behavior, frequency, what they’re strategically purchasing. We will pick apart what our value guests is doing and what our more frequent guest is doing. We don’t know where the guest is going to be trending as some inflationary pressures persist, but it’s a high watch for us.”