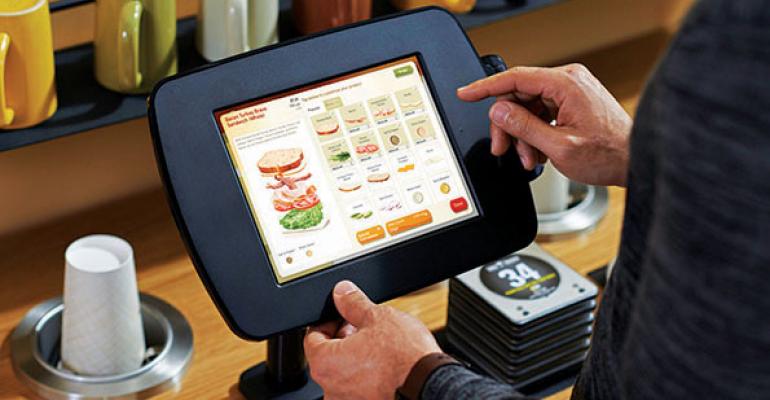 Panera Bread Co. plans to convert as many as 300 more restaurants to its enhanced-technology Panera 2.0 format this year, executives said Thursday.

The St. Louis-based bakery-café operator has already installed Panera 2.0 in about 100 units. The cost of the upgrades is expected to weigh on earnings, officials said during a fourth-quarter call with analysts. The company forecasts earnings growth to be flat to the low single digits for 2015.

Ron Shaich, Panera’s founder, chairman and CEO, also said the company plans to refranchise between 50 and 150 locations, staying within its target of a system that is 35-percent to 50-percent company owned. Panera’s 1,880-unit system was about half company owned at the end of 2014, he said.

Sharon Zackfia, analyst with William Blair & Co., said in a client note Thursday that the refranchising effort would bring the company-owned mix down to 42 percent to 47 percent. “All potential markets subject to refranchising are profitable markets for Panera,” Zackfia said.

The Panera 2.0 technology conversion is currently focused on company locations and will move to franchised units in late 2015 or 2016, Shaich said.

“We expect to convert approximately 300 company cafés in 2015, which will bring us up to 400 or so company cafés — or almost half of our company stores — by year end,” Shaich said. “We anticipate approximately 75 to 100 of those conversions will occur in the first half of 2015, with the remaining 200 to 225 cafés converting in the second half.”

Zackfia said her team suspected that the investments would continue into 2017 as well.

“The company should begin to harvest the increasing profitability from sites converted in 2015, which we believe will position the company for low-double-digit EPS growth in 2016,” Zackfia noted, projecting an 11-percent increase, to $7 per share.

Shaich noted that the Panera 2.0 conversions take time. “Panera 2.0 is not a light switch. To do this right takes time and effort,” he said. “That’s why Panera 2.0 will represent a barrier to entry for smaller players, as well as a competitive advantage for Panera generally.”

The most recent fourth iteration of Panera 2.0, which was announced in spring 2014, led to conversions in the Los Angeles, Seattle and San Francisco Bay Area markets, which were completed in the fourth quarter.

“This is a play for the long term, not for the next quarter,” Shaich said.

Besides consumer-facing technology, such as mobile app orders and payments, the Panera 2.0 initiative also includes ops changes and added labor for accuracy and volume, he said.

“Panera 2.0 is already generating improvements that can be spun out to the rest of the Panera system,” Shaich said, citing Rapid Pick Up, which allows customers to order and pay for their meals via website or mobile app and pick up orders from a shelf area without standing in line. Rapid Pick Up was rolled out to the entire system without waiting for 2.0 conversions, he said. At company units, Rapid Pick Up now represents 3 percent of transactions, without a marketing push.

In the fourth quarter, about 8 percent of Panera’s sales at company units occurred digitally, such as from the Web, mobile devices or kiosks.

“That rate of digital adoption is more than double what we were at the end of the second quarter,” Shaich said, noting that major pizza brands are in the 35 percent to 50 percent range.

In addition to investing in Panera 2.0 conversions, the company is also building more catering “hubs,” where large orders are centralized. Shaich said Panera built 15 company-owned hubs in 2014, and plans 11 more for 2015.

“By year end 2015, we expect to have approximately one third of our catering sales hubbed,” he said.

“We believe investments in delivery hubs and Panera 2.0 are the right thing to do for the medium- and long-term health of our company,” Shaich said. “But we’re not blind to the fact that these investments are having a drag on the P&L in 2015.”

Shaich emphasized that technology would become a more important part of the restaurant business in the years ahead, and Panera was working to stay ahead of the curve. “We would argue that all restaurant companies will need to meet the ante that Panera 2.0 represents,” Shaich told analysts.

As of Dec. 31, the company owned and franchised locations in 45 states, the District of Columbia and Ontario, Canada, under the Panera Bread, Saint Louis Bread Co. and Paradise Bakery & Café brands.