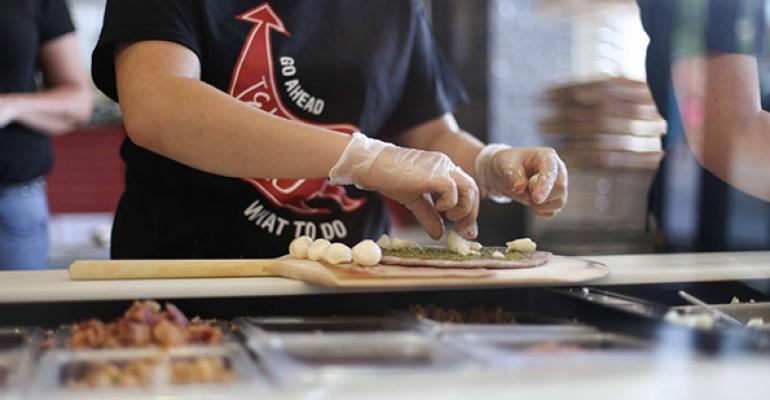 <p>A key point of differentiation for the fast-casual brand is the hand-stretched dough.</p>
News>Emerging Chains

As the first crop of fast-casual pizza brands race to pass the 100-unit milestone this year, new concepts continue to emerge in the crowded space.

Some of these smaller newcomers are gunning to capture certain regions before the larger national brands move in. Others have national aspirations, saying they have built a better mousetrap.

All, however, are modeled after the increasingly familiar build-your-own-pizza format, which has become one of the hottest niches within the growing fast-casual space.

In the St. Louis area, Crushed Red Urban Bake and Chop Shop is just starting to franchise, and will soon move into Colorado. In the Washington, D.C., area, &pizza recently landed $10 million in new funding.  And in Los Angeles, the CEO of the frozen yogurt chain Menchie’s was scheduled in May to launch MidiCi Neapolitan Pizza.

These small chains are competing with larger, more established brands like Blaze Pizza, which was the first to reach 50 units, in December. Not far behind is Pieology, which expects to reach 110 locations before the end of the year.

Mod Pizza also plans to surpass 100 restaurants before the end of 2015. The 31-unit Pie Five Pizza Co., operated and franchised by Rave Restaurant Group Inc., plans to add 60 to 65 units this year. And the 30-unit Uncle Maddio’s Pizza Joint expects to double its unit count in fiscal 2015.

Despite such growth planned by the more established brands, new up-and-coming players say there’s plenty of room for more.

Here’s a look at what makes these newcomers unique.

The three watched the first wave of fast-casual pizza concepts open, and considered franchising one of those brands. But after doing some research, the group decided to create their own concept, Morgan said.

“We have more than 50 years of experience in the pizza business between us,” he said. “We thought we could build a better mousetrap.”

Fired Pie offers both signature and custom-built 11-inch pies for a set price of $7.95. The pizzas are baked in a gas-fired Woodstone deck oven in about three to four minutes.

The menu also features custom-built salads, with many of the same quality ingredients. Salads now account for about 28 percent of sales, and it prevents a veto vote from those who don’t want pizza, Morgan said.

The chain has 10 locations open throughout Arizona, with four more units planned to open before the end of the year.

So far, all locations are company owned, and Morgan said they have no plans to franchise.

“For every other player, that’s their model,” he said. “But we want to have control over the quality and guest experience.”

Average unit volumes range from $750,000 to $1.5 million. The chain will add its first food court location in Scottsdale, Ariz., at the end of March.

Some of the more established fast-casual pizza brands have come to Arizona, including Pizza Studio, Pieology and Mod Pizza, Morgan said, but he’s not worried.

“We are the biggest player in the region, and we think that’s key, that we’re local,” he said. “We definitely know we will have to go out of state at some point, but there’s no reason to go there yet.”

So far, growth has been funded with personal money, family and friends, and restaurant profits.

“We’re going out for a capital raise later this year that we hope will get us to that next 20 to 30 restaurants,” Morgan said. “This segment is so large and there’s so much money in the pizza industry as a whole, it’ll continue to grow.”

The Blast 825 concept was created about two years ago by Milano Restaurants International Corp., the Fresno, Calif.-based parent to the 58-unit Me-n-Ed’s Pizzeria, a traditional pizza parlor chain, along with several single-unit restaurants.

Blast 825 is not a fast-casual version of Me-n-Ed’s, said John Ferdinandi, Milano’s president and CEO. It was created as an entirely new concept, with different dough and sauce recipes.

A key point of differentiation for the fast-casual brand is the hand-stretched dough, Ferdinandi said. The chain pre-bakes crusts in the morning to get the pizzas started, so they can be finished to order in less than three minutes in 825-degree dome ovens.

“Everyone else is pressing their dough out there, which really hurts the quality,” he said.

The chain has four units and two more under construction, all in Northern California.

The company is in the process of launching a franchise program, and expects to sign its first franchisees later this year. Ferdinandi said he couldn’t disclose sales, but the concept was “trending up.”

“It’s a mad dash right now, with national, regional and local players all trying to carve out a piece,” Ferdinandi said. “We’re just being very methodical in how we grow and where we put our stores.”

In Northern California, there is already plenty of competition from other fast-casual pizza players, he said.

“There are already pizza places in most centers, so it’s hard to be the first one there. But we have a better product and a better execution at the end of the day,” he said.

“We’ll be a strong regional brand,” he said.

Crushed Red is positioned as an elevated fast-casual pizza concept, with both signature and build-your-own chopped salads — the chain sells more salads than pizza.

The menu also includes a daily lineup of soups, and appetizers like herbed goat cheese crusted with almonds and dried cranberries, topped with agave nectar and served with flatbread and lavash. Beer and wine is also available, and the restaurants serve on china with real glassware, not disposable.

The oval-shaped pizzas are baked in a proprietary double-stack stone oven, manufactured in St. Louis, with a rotating turntable and gas heat, with radiant electric on top. Pies take about 90 seconds to bake, LaRocca said.

“We call it ‘artisan fast’ or ‘elevated fast casual,’” LaRocca said, adding that the restaurants average about $1.5 million annually.

Crushed Red, however, has just two units open, but a third is scheduled to open in June, all in the St. Louis area. Last year, parent company On the Rocks Restaurant Holdings launched a franchising program. The first franchisee has signed on to build six restaurants in the Denver market over the next five years.

LaRocca estimates that the chain will have 18 locations by the end of 2016.

The fast-casual pizza space is crowded, LaRocca said, but the brand stands out from the crowd with its expanded menu. His goal is to take Crushed Red national.

“Because we’re so different, the other brands are not really a concern,” he said. “There’s more depth to what we’re doing.

The first &pizza restaurant opened in the Washington, D.C., area in 2012. The chain has grown to include nine locations, and in March closed on a $10 million injection from a private investor to continue expansion.

Six more units are slated for the greater D.C. area in the first half of 2012, and founders Steve Salis and Michael Lastoria have attracted the support of former Ruby Tuesday founder and CEO Sandy Beall, who chairs the &pizza board.

The menu is focused on signature and custom-pizza options, although a few salads are available, along with a dessert pizza made with ricotta, white chocolate and mixed berries.

The concept has focused on urban locations, looking for emerging communities. However, &pizza has also been testing more mainstream locations, and nontraditional units are planned for both Reagan National Airport and Dulles International Airport in the D.C. area.

Amit Kleinberger, CEO of frozen yogurt chain Menchie’s, was scheduled to debut a new Neapolitan-style, fast-casual pizza concept in Los Angeles in May.

Dubbed MidiCi Neapolitan Pizza — MidiCi is pronounced mee-dee-chee — the concept is designed to fill what Kleinberger sees as a gap in the burgeoning fast-casual pizza category for a more upscale Neapolitan brand.

Los Angeles is already home to the growing 800 Degrees Neapolitan Pizza chain, which has seven units, and was the first within the fast-casual, build-your-own-pizza category that followed the Neapolitan tradition.

But MidiCi will be different, Kleinberger said. The restaurant will have a design that leans more toward fine dining, and it will offer brunch on weekends, an appetizer menu, and more beer and wine options than what is typically found at other fast-casual pizza concepts.

“We are a true hybrid of fine and casual dining. I don’t even consider us in the category of fast casual,” Kleinberger said.

Like other fast-casual players, however, MidiCi is based on the model of a 12-inch pie, priced between $6 to $8, with additional toppings priced at $1 each.

Pies are baked to order in a wood-fired oven. The dough is made from scratch in house in the Neapolitan tradition, using double-zero flour imported from Italy, and is hand-stretched in front of guests. No ingredients are genetically modified, which Kleinberger said is very important to consumers today.

The restaurant features a sit-down bar with 13 seats, where guests can choose from a selection of beers, wine and espresso made manually, “as it would be in Italy,” Kleinberger said. A 21-foot olive tree is the centerpiece of the room. The goal is to create more of a dining experience, Kleinberger said.

Kleinberger is founder and CEO of MidiCi, which will be franchised by MidiCi Group LLC, also located in Menchie’s base of Encino, Calif. The company has already signed agreements with franchisees to bring the pizza concept to Michigan, Florida, Texas and other parts of California.