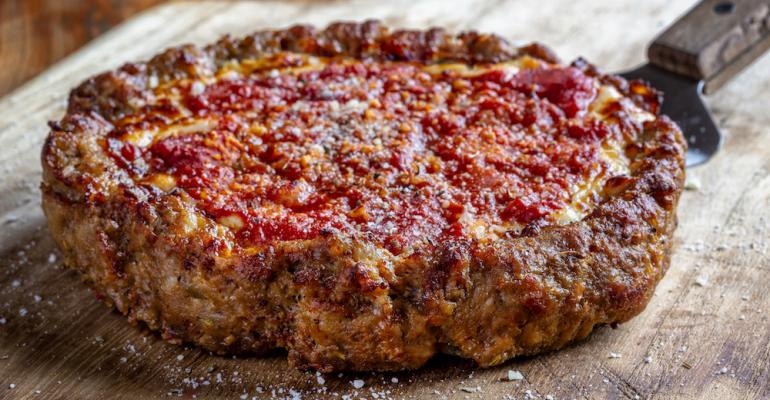 Pieology uses chicken and Uno Pizzeria & Grill makes a base out of sausage.

More and more Americans are avoiding carbohydrates — the low-carb, high-fat keto diet was the most searched diet on Google in 2019 and it spiked even more in early 2020 — but they also love pizza, which is, of course, naturally carb-heavy.

Many Pizzerias — such as Blaze Fast-Fire’d Pizza, Donatos Pizza and Your Pie — have responded with low-carb pizza crusts, often made mostly with cauliflower. Others have removed the crust altogether, dumped pizza toppings in a bowl and called that casserole a pizza; that’s what Rapid Fired Pizza has done with its No Doh Pizza: Sauce and toppings are served in a pan over spinach or grated Parmesan cheese.

Related: The latest plot twist in the Chicken Sandwich War stars McDonald's and centers on MSG use

But two chains — Uno Pizzeria & Grill, based in Boston, and Pieology out of Tustin, Calif. — have decided instead to serve their pizza over meat

Uno’s No-Dough Sausage Pie is an extension of the 100-unit chain’s “Love All, Feed All” menu, which was introduced last fall. That menu focuses mostly on low-calorie, vegetarian and gluten-free options, but CEO Jim Ilaria and his development saw no reason to leave out the growing number of people following the keto diet, or the high protein paleo diet. So this year they introduced a pie with a “crust” made out of sausage.

The sausage is pressed into the pizza pan just as you would the dough for a Chicago-style deep-dish pizza. Then it’s par-baked and cooled to make it rigid. Shredded mozzarella, a new chunkier tomato sauce and Pecorino Romano cheese are added, the whole thing is baked and it’s served as an individual-sized pizza for $13.99.

“It turns out it tastes great,” Ilaria said, adding that although the pizza was first introduced as a special in January, it was popular enough that the limited-time-offer was extended, and it might find a permanent place on the menu.

Ilaria added that Uno’s traditional deep-dish sausage pizza is made by pressing sausage onto a traditional crust, so, as unusual as it seems, it fits into the chain’s traditions.

Pieology’s Protein Style Chicken Base is a mixture of chicken breast, eggs and a proprietary cheese blend made into a crust available with any pizza for a $3 premium.

“We’re always looking for new ways to appeal to our existing guests and to give them new occasions to visit, but also meanwhile appealing to new audiences,” said Chad Bailey, vice president of marketing for the chain of more than 130 pizzerias. “We continue to see Keto grow as a macro trend, and we really just wanted to have a fresh take on how to appeal to this crowd.” 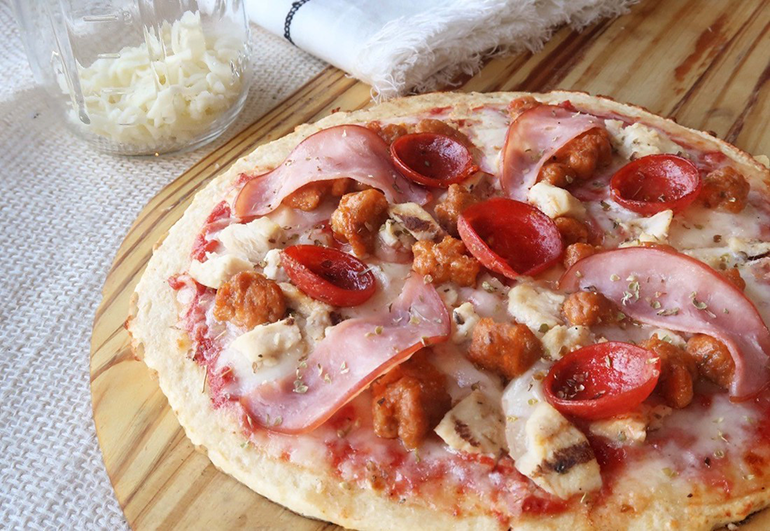 He added that, with the growth in popularity of chicken in general, and the quick service chicken wars in particular, using that protein seemed like the way to go — and it has broader appeal than cauliflower.

“We wanted to do something different,” Bailey said. “There are other keto crusts out there, but with all the chicken battles and chicken craze of protein, this would be something that was more significant, more substantial and also had wide appeal.”

The Protein-Style Chicken Base is slated to stay on Pieology’s menu until June, or while supplies last.