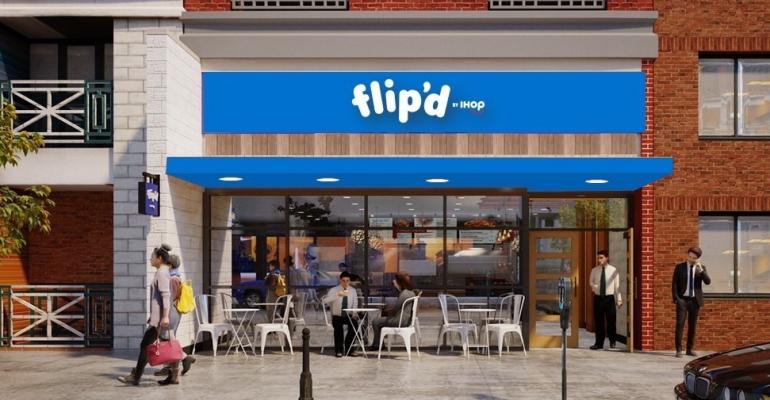 IHOP
Flip'd by IHOP, a new fast-casual concept, is expected to open this summer in New York City.
News>Fast Casual

“Since we originally announced Flip’d in 2019, a lot has changed. We wanted to ensure that we were evolving the concept to meet our guests’ needs,” said Jay Johns, IHOP president, in a statement.

Glendale, Calif.-based Dine Brands a year and a half ago said Flip’d by IHOP was scheduled to open Atlanta in April 2020, but the COVID-19 pandemic was declared in March.

The company said IHOP will now be piloting the Flip’d concept in three different areas including larger metropolitan areas, suburban areas and non-traditional venues. Original plans focused primarily on large metropolitan cities. Besides New York City, the company said additional locations were being explored in Lawrence, Kan., and Columbus and Dublin in Ohio.

“While we know there is a pent-up demand for a return to dining in restaurants, we anticipate that our delivery and takeout business is here to stay as consumer needs continue to shift and they seek out different ways to experience IHOP favorites,” Johns said.

“With Flip’d,” he said, “we can provide that on-the-go fast-casual experience, making now the perfect time to bring this concept into the world.”

Flip’d will offer breakfast, lunch and dinner. Original plans called for units at a little over 2,000 square feet, or about half the size of a traditional IHOP restaurants.

“Even though the footprints of these initial Flip’d locations will vary during this pilot phase,” Johns said, “what will remain consistent is our emphasis on quality, speed, to-go and delivery, all with the crave-worthy food that has been a hallmark of the IHOP brand for more than six decades.”

Flip’d’s menu will be offered all day and borrow inspiration from iconic IHOP favorites, the company said. It will feature reimagined breakfast classics like pancake bowls and egg sandwiches as well as more afternoon-evening-oriented options including burritos, steakburgers, salads and chicken sandwiches.

Customers will order from a digital kiosk or directly at the counter as well as online. Flip’d will have a designated to-go area and offer delivery.

Flip’d by IHOP is among IHOP’s 2021 development plans, which besides traditional units include non-traditional and smaller-format locations.

International House of Pancakes LLC, founded in 1948, has more than 1,600 restaurants in the United States and more than 100 units abroad.