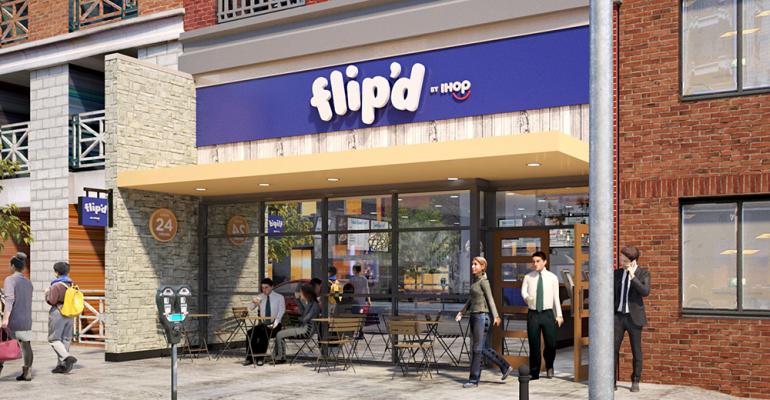 IHOP is rolling out a new fast-casual concept. Flip’d by IHOP is set to open Atlanta in April with plans to open in other major cities in 2020. The brand is looking at locations in New York City, Chicago, Boston, Dallas. The fast-casual breakfast market is underserved, executives said, and Flip’d is filling an unmet need for consumers.

“We saw that there was some whitespace in fast breakfast with great quality products,” said Jay Johns, brand president of IHOP, a Dine Brands Global Inc. brand.

“We did research on this and what we found was a lot of people were even complaining about the food they get in the morning. They liked the coffee, but they settled for a substandard food based on what they offered at the place that got the coffee. So we're flipping that on its head, we're going to have great food. And, oh, by the way, they can still get the espresso beverages,” he added.

This isn’t IHOP’s first foray into smaller locations. In 2017, the brand debuted an IHOP Express at Dallas/Fort Worth International Airport. In 2011, the brand opened a smaller, fast-casual variant of the standard location in San Diego.

The Flip’d menu is filled with portable versions of IHOP favorites, like pancake bowls. This menu item, Johns notes, was inspired by the brand’s research.

“Sitting down and eating a plate of pancakes was not something that was going to work really well for these guests, yet they still love IHOP pancakes and still wanted them,” he said. “So, they actually came up with the notion — ’why don’t you just put them in a bowl and let me take them with me?’”

Once the pancakes are made, guests can go to “build your own pancake bar” with items like blueberries, strawberries, and pineapple; fruit compotes; chocolate chips and caramel sauce. Other breakfast items include egg sandwiches, breakfast burritos, fresh-squeezed orange juice, and nitro and specialty espresso beverages.

Although the focus is on breakfast, the restaurants will be open at lunch and dinner time, too, serving items like IHOP’s Ultimate Steakburgers and Buttermilk Crispy Chicken.

There will be some seating at Flip’d, but the focus will be on takeout and delivery. The concept will include a designated to-go area. In-store, guests can order from a kiosk or directly at the counter. Johns imagines the concept will cater mostly to “busy city dwellers.”

Most locations will be a little over 2,000-square-feet, or about half the size of a traditional IHOP location. This new concept was introduced to franchisees at the brand’s conference this past fall, said Johns, and many franchisees have expressed interest.

“I think that it opens up business development chances in areas that we don't have a lot of restaurants,” said Johns. “I use Manhattan as my example. Look at the millions of people who live here [but] we have two locations right now in Manhattan. So, there's a big white space and a big opportunity for us. And I think the current franchisees see that as a growth opportunity for them, and they're pretty excited about it.”