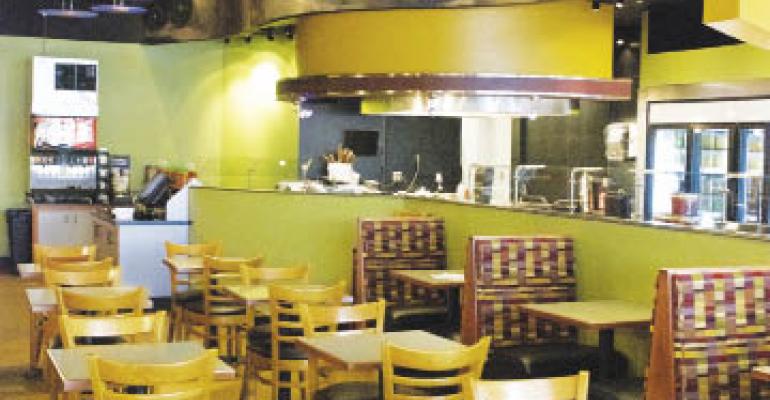 At 34 units, HuHot Mongolian Grill is not yet a Mongol horde of restaurants.

But with enthusiastic franchisees adding stores and a new quick-service concept in operation, the chain is expecting to grow by nearly 20 percent this year.

The 11-year-old system permits guests unlimited trips through the service line of its 33 full-service restaurants, where they can select from chicken, beef, shrimp or tofu, produce and 12 sauces to create personalized Asian-flavored dishes that are prepared on a six-foot circular grill.

And while HuHot has big expansion plans for its full-service concept, it also is exploring growth opportunities for its weeks-old quick-service variant, HuHot Express.

The company ended 2009 with 31 restaurants — four franchisor-owned and 27 run by franchisees — and expects to ring out 2010 with 37 locations, chief executive Andrew Vap said.

Five of the six new units are being opened by existing franchisees and the sixth by a new one. Vap indicated that the chain’s recession performance might help explain the appeal.

HuHot restaurants also offer appetizers such as crab Rangoon, salads and desserts, including make-your-own s’mores. All sell beer and wine, with a handful boasting full bars, but Vap noted that alcoholic beverages account for only about 4 percent of sales.

Vap cited making training stick as being among the major challenges in stewarding HuHot’s growth. “You train to a standard, but well-intentioned people figure out another way to do it,” he said.

“Grill management,” he explained, “makes or breaks every meal” because of “the theory about how our sauces thicken and start to caramelize at the same time the meal is getting finished, and the need we have to get food off the grill while there is still moisture there.”

“In middle markets, it is easier to pick up a daytime and nighttime population in the same location,” he said. “But when you start to target bigger metro areas, a lot of the time you’re stuck with one or the other [daypart, and so] you’ve got to be able to pound throughput at certain periods.”

HuHot, to date, has targeted such “middle markets,” or metropolitan statistical areas with populations ranging from 150,000 to 400,000.

“You can go into those markets with our meager $800,000 build-out, and you can impress people,” said Vap, adding that in such areas “employees are great, and locations are easier to find.

“But there are only so many of those [middle markets],” Vap said.

He said the new HuHot Express quick-service concept, which debuted in September in Fort Collins, Colo., is part of the chain’s strategy for moving into major metropolitan areas, which also involves ringing big cities with restaurants in outlying communities to build brand awareness going in.

“If you are doing [a quick-service concept] with 2,000 to 2,500 square feet per location versus 5,500 to 6,000 square feet for a full-size, [full-service restaurant], and at half the build-out cost of a full-size, you can do more development to generate brand awareness while spreading the risk,” Vap said of HuHot Express, which also is intended to fill out smaller markets with full-service units by attracting consumers looking for the same food experience, but at lower price points or faster service times.

According to marketing director Stephanie Krause, HuHot Express costs about $400,000 to develop and has targeted annual sales of $1 million from per-person averages of about $9 at lunch and $11 at dinner. She said it features a service format in which employees assemble orders as directed by guests, and it seats 80 people, compared with its full-service sibling’s capacity of up to 180.

The annual “How Do You HuHot?” guest recipe contest is among the chain’s best-received marketing initiatives, said Krause, who also pointed to new quarterly sauce specials, such as the Pillager’s Red Curry available through December.