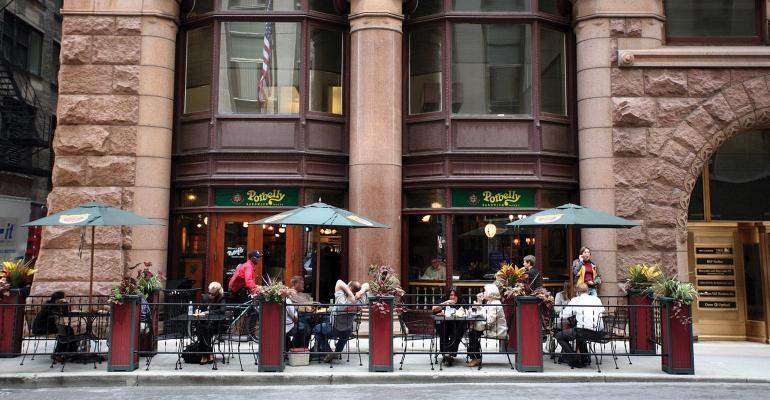 Potbelly recently achieved record-high average unit volumes and plans to aggressively expand in the next eight to 10 years.
News>Fast Casual

Potbelly has been through as many ups and downs as one can imagine since first opening in 1977. The 450-unit sandwich chain experienced years of sales declines and closures that eroded over half of its 2013 IPO within its first year of trading. Then, in the throes of the pandemic in 2020, Potbelly vowed to close about 25% of its restaurants in a bid to avoid bankruptcy.

The chain hired Bob Wright as CEO in July 2020 and he and his leadership team immediately implemented a five-pillar strategy to put the brand in a stronger position. Those pillars include great food at a great value; great people and experience; efficient operations that bring people back; enhancing digital channels to communicate and connect with customers; and growing through franchising. During the company’s most recent quarterly earnings call, Wright reported Potbelly achieved record-high average unit volumes and began turning a profit as well.

But don’t call it a comeback. Or a turnaround.

“’Turnaround is used a lot. Our story is more of a pivot to growth,” Wright said during an interview Tuesday. To ignite that pivot, the company started embracing its heritage.

“I believe this brand had a ton of latent equity that had not been nurtured. At the foundation of our strategy is just having the confidence in how special our brand is and to recognize those opportunities around that brand equity,” he said.

There was plenty of low-hanging fruit to do just that, starting with a focus on the marketing budget. Wright said the company was spending less than 1% of its sales on marketing prior to his arrival.

“The industry on average spends 4-to-5% of sales on marketing, so we have quite a bit of catching up to do. Last year we started leaning into digital advertising and digital assets on the consumer side with our app and web and it’s helped us create more top-of-mind awareness because we’re tapping into that latent brand equity,” Wright said.

Potbelly tests new initiatives against a small control group of stores before expanding to its 450 locations and is actively doing this with its marketing spend. The model helps prove a return on investment before going deeper, Wright said, adding that the company tested its way up to 2% marketing spend and “is not stopping there.”

“There’s really no reason we shouldn’t be spending industry averages,” he said. “Our expectations are for every dollar we spend here, we get $3-to-$5 back on the topline.”

Marketing is just part of the “pivot to growth” formula, however. Potbelly has also put a significant amount of work into its menu. Wright said 2020 consumer analyses showed a significant price versus value proposition, so the company rebuilt its menu in 2020 and 2021, adding more meat, cheese and sides and bringing in a lower-priced “skinny” sandwich underneath its original and big sizes. This, Wright said, re-established value at the brand which drives the critical metric of traffic. The company reported in Q3 it has expanded traffic share alongside market share in the broader industry.

“The most healthy way to grow is through actual traffic growth. It shows you’re gaining customers, building relevance and engagement. We are always working toward traffic-driven profitability,” he said. “If you’re not profitable, you’re in big trouble. We needed to restore profitability to the brand so we had the freedom to grow again and we focused on traffic to do that.”

Potbelly has also prioritized its technology platforms to drive traffic, as well as to ease operations. The company’s digital sales mix has consistently hovered close to 40% for over a year, driven by a tech stack that includes a new app, new website, new loyalty engine, a new order integration platform, an updated payments infrastructure and a new “Potbelly Digital Kitchen.” The PDK was introduced earlier this year to streamline all orders regardless of where they originate. That kitchen is now in test in about 25 locations and Wright hinted at “significant expansion in 2023 on our way to full implementation.” All new builds will open with a PDK as well.

“As we’ve been driving AUVs to record levels, we’ve maintained and increased our mix through digital and I think it can get even bigger still as we layer in our own assets. The digital kitchen is a great example of how we make that part of the experience seamless, and it has been a big advantage for operators,” Wright said. “The tech is working hard for us by streamlining coordination of all those orders and feeding them to the right associates. The early read is it generates better accuracy and on-time delivery, and it is saving us about an hour a day on labor.”

These initiatives are just the tip of the iceberg as Potbelly positions itself for aggressive growth, including a goal of reaching at least 2,000 restaurants in the next eight to 10 years. In the near term, Potbelly plans to continue riding its momentum in 2023 with more strategic investments guided by its five pillars. That includes a continued uptick in marketing spend and broader rollout of the Potbelly Digital Kitchen. It also includes the next phase of growth which for Wright means “getting into new markets and finishing penetrating the ones we’re already in.”

“We’re in 32 states from the Pacific to the Atlantic and from north to south. We’re not a 400-unit regional chain trying to prove we can go national – we already have. And we have great success in all of our markets, we’ve just never grown in a disciplined manner to finish penetration of the markets we’ve entered,” Wright said. “We don’t have to grow in a slow-plotting pace from east to west, we’ve done it. We just didn’t finish the job and now we intend to.”