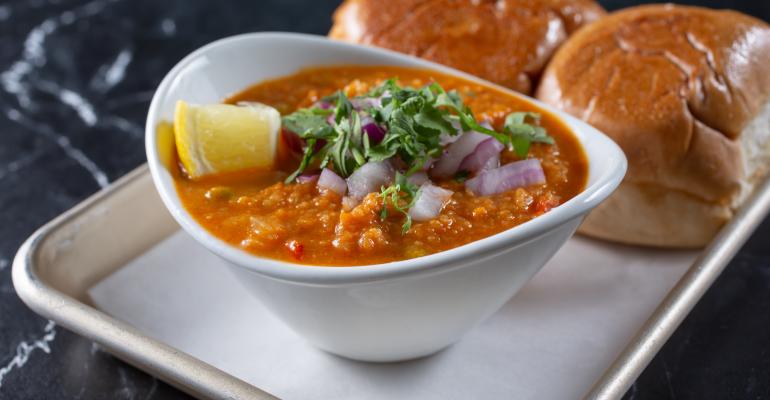 Started during COVID, this Indian fast-casual brand had the chance to grow because of “the demand for Indian food right now,” said Antonio Kanickara, director of operations and executive chef at Tulsi.
News>Fast Casual

A restaurant 20 years in the making, Tulsi is the combination of various Indian regional cuisines plus a twist of some fusion elements rolled into a 100% plant-based menu. Started during COVID, this Indian fast-casual brand had the chance to grow because of “the demand for Indian food right now,” said Antonio Kanickaraj, director of operations and executive chef at Tulsi.

As for the name, it’s rooted in Hindi history.

“We brainstormed many names while developing the restaurant, and one name stuck above all. Tulsi ‘Holy Basil’ is simple, sacred, pure, and deeply rooted in Indian culture. It fits perfectly into what we were trying to build,” said CEO Chirag Shah in a statement.

Not only did the brand open during COVID, but it also grew while others were closing units or shutting up shop all together. The chain has three locations open and three more under construction. Kanickaraj said the momentum is partly due to the fact that it has a plant-based menu.

“We have [had] a pretty good reception in Southern California [where there is] a high demand of healthy eaters. So the plant-based menu is very well accepted in this region,” he said.

Tulsi plans to open 11 total units in 2023, expansion that they see as smart growth.

“We have a vision, and this is not reckless growth,” Kanickaraj said.

The menu has four parts: Western India, Southern India, Northern India, and The Influencers. The three regions of India are each led by master chefs from that region, trained by Kanickaraj himself on how to execute the highly local and specialized recipes.

While the Western menu is collectively the most popular, Kanickaraj said that some of the most popular items on the menu include the dosas from Southern India, of which there are four: Plain, Butter Masala, Tulsi Special Masala, and Gunpowder, which is filled with a special spice powder.

The Influencers are a fusion element comprised of things like the Paneer Tikka Tacos, which are tandoor cooked and marinated cottage cheese stuffed in tortillas with a drizzle of house-made sauce.

The local Indian population, which Kanickaraj said is 60% of the chain’s customer base, is thrilled with the idea of Tulsi’s cuisine.

“The idea of having master chefs work on these dishes or lead these kitchens is really helping us, because they add a lot of authenticity and originality to the dish itself,” he said. “It's not adulterated, it's just original.”

The prices are also low despite inflation. A family meal that serves up to four only costs $35, according to the chain’s website.

“We don't want to change the prices until we see some significant change in our sales,” he said. “The volume is what is helping us maintain the prices.”

That volume has helped Tulsi double its footprint this year. By the time it reaches its goal of 11 by the end of the year, it will have almost quadrupled in size.

“We see a huge demographic of people having this need,” Kanickaraj said, “or the scarcity of good vegetarian quality Indian food, which is not easily available.”