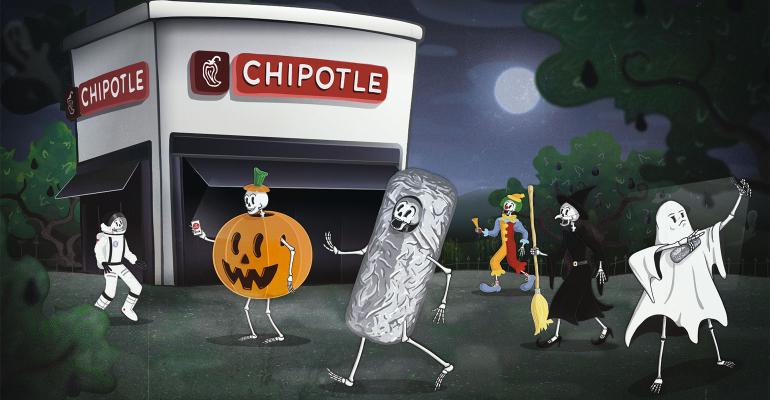 This marks the 22nd year of the chain’s Halloween celebration, which offers special deals for Rewards customers dressed up in costumes.
News>Fast Casual

Chipotle taps into BeReal to bring back its Boorito promotion

This marks the 22nd year of the promotion, and the first in-person version since 2019

For the first time since 2019, Chipotle’s “Boorito” promotion will be held as an in-person event Oct. 31.

This marks the 22nd year of the chain’s Halloween celebration, which offers special deals for Rewards customers dressed up in costumes. For the past three years, the chain has leveraged social media and the metaverse for the popular promotion, including the launch of a TikTok transformation challenge in 2019 and the opening of its first virtual Roblox storefront last year.

Related: Chipotle brings its annual Boorito promotion to the metaverse through Roblox

Shortly after the onset of the pandemic in 2020, Chipotle went all digital with the tradition, offering mobile users the chance to receive coupons via Instagram, TikTok or Twitter. This year, Chipotle is tapping into a new platform in BeReal. The social media site gives users a 2-minute deadline to post whatever is happening in their day.

Chipotle customers will have the chance to win one of 10 free burritos for a year if they take a BeReal photo in costume at a Chipotle restaurant Oct. 31 and use the #booritosweepsteaks hashtag, or if they share their BeReal to Instagram Stories tagging the brand and using the hashtag.

“Boorito is all about having fun with your friends and enjoying real food in our restaurants. After two years of celebrating virtually, we’re leveling up the in-person experience with fun activations on social that will bring fans together on Halloween,” CMO Chris Brandt said in a statement.

BeReal was first launched in 2020 and quickly gained favor on college campuses due to its paid ambassador program. As of August, the application has over 10 million active daily users, according to the company, and 21.6 million active monthly users.

Uncoincidentally, may be targeting college towns as part of its plan to reach 7,000 restaurants, from about 3,000 currently. During the company’s Q2 earnings call in July, CFO Jack Hartung said about 15% of the chain’s restaurants are currently in a college town and those locations are strong performers.

“For the first time in three years, (we) saw kind of normal college seasonality, meaning the college restaurants really performed exceptionally well during the school year because they were all in-person,” he said. “And we saw seasonality that we haven’t seen in three years, where the college students go back home and they tend to eat less … When we track the individual customers, they tend to visit Chipotle to a lesser degree when they’re away from college than at college.”

Notably, this year’s Boorito offer is for customers who sign up for the chain’s Rewards program, which currently counts over 29 million members. The chain is doubling down on incentives to join the program by giving away cash to Rewards members on Oct. 13, Oct. 20, Oct. 25 and Oct. 27 through CashApp.

There’s a reason Chipotle is prioritizing Rewards signups, as executives have repeatedly noted that those customers tend to spend and visit more.

This year’s promotion is good for a $6 entrée, illustrating the pricing increases the chain has taken throughout the past two years to manage inflationary pressures. Last year, Boorito was $5 offer, while in 2019, the promotion was good for a $4 entrée.