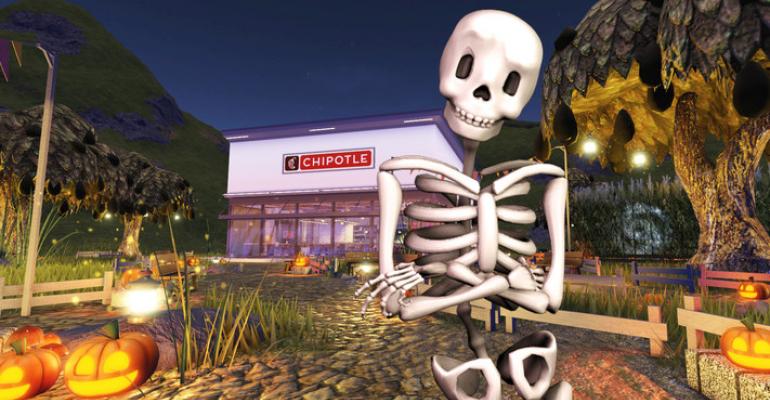 Chipotle brings its annual Boorito promotion to the metaverse through Roblox

In an attempt to reach younger diners where they are, Chipotle Mexican Grill on Tuesday announced plans to bring its annual Boorito Halloween promotion to the gaming world with a virtual restaurant on Roblox.

Known for its colorful blocky characters and appeal to children, Roblox boasts more than 43 million players on the platform each day. Starting Oct. 28, those players will be able to visit a virtual Chipotle as avatars dressed in Chipotle costumes, like a Chip Bag Ghost, Burrito Mummy, Spicy Devil and Guacenstein.

Players can navigate the Boorito Maze to unlock exclusive virtual items. The first 30,000 Roblox users who visit the cashier at the virtual Chipotle each day will receive a code for a free burrito (one per player). Chipotle expects to give away $1 million in free burritos.

And, as has become tradition for 21 years, Halloween revelers in the U.S. can also get $5 off a burrito, bowl, salad or taco entrée from 5 p.m. to closing on Halloween night with the digital-only promo code “BOORITO” at checkout through the Chipotle app and at Chipotle.com.

In the past, costumed guests were invited into restaurants on Halloween to earn special deals.  But this year the chain is making the offer a digital exclusive, and one available in the metaverse through Roblox.

It’s not the first time Chipotle has moved into the realm of virtual gaming. Earlier this year, Chipotle became the limited-service restaurant partner of Twitch, and in 2019 launched a branded gaming tournament.

“As a digital innovator, we are always experimenting with new platforms to meet our guests where they are,” said Chris Brandt, Chipotle’s chief marketing officer, in a statement. “Roblox’s popularity has boomed over the past year, and we know our fans will be excited to celebrate the next evolution of Boorito in the metaverse.”