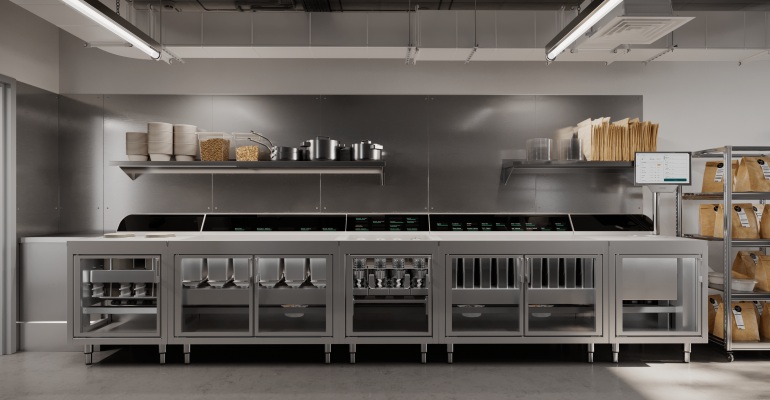 In addition, the fund is investing in Meati Foods, a company developing plant-based proteins from mushroom root. The company’s debut product, rolled out this month, will include whole-food cutlets and steaks — made from mushrooms using a sustainable and clean process — under the brand Eat Meati.

Details on the investments were not disclosed. The Cultivate Next fund was designed to make early-stage investments in seed-to-Series B-stage companies that can accelerate Chipotle’s aggressive growth plans and advance the company’s Food With Integrity mission, but also potentially revolutionize the restaurant industry.

Hyphen, for example, developed The Makeline, an automated system that uses robotics and a customized operating system to allow kitchens to move faster — potentially more than 350 meals per hour. Designed to eliminate order defects and cross-contamination, the system assembles digital orders from various sources under the counter via automated production, allowing staff to assemble in-house orders from the top of the counter. The company is already working with restaurant chains, virtual brands and co-packers that were not identified.

“Hyphen is reimagining the intersection between makelines and digital kitchens, with a focus on improving speed and order accuracy,” said Curt Garner, Chipotle’s chief technology officer, in a statement. “Their use of robotics to enhance the employee and guest experience to find efficiencies in the restaurant industry aligns with our mission of leveraging emerging technology to increase access to real food.”

Chipotle pioneered the model of using a second makeline in the kitchen to support orders coming through digital channels. The Newport Beach, Calif.-based chain is also testing the use of robotics to support kitchen staff by taking on tasks like frying tortilla chips.

Stephen Klein, co-founder and CEO of Hyphen, said the Cultivate Next investment will allow the San Jose, Calif.-based tech company to accelerate hiring, invest more heavily in research and development while providing the necessary infrastructure to scale sustainably.

“We’re thrilled to work with Chipotle to find more innovative solutions by removing repetitive tasks from the employee experience so they can focus on creating delicious dishes and providing outstanding hospitality,” Klein said in a statement.

Meati Foods, based in Boulder, Colo., has developed an indoor, year-round growing system that produces mushroom roots without exposure to pollutants or pesticides, and without the use of antibiotics or growth hormones sometimes used in meat.

“We are excited to support new ways to bring vegetables to the center of the plate through plant-based alternative protein options that mirror Chipotle’s Food With Integrity standards,” said Garner. “Meati is producing responsibly grown plant-based protein that tastes delicious.”

Tyler Huggins, Meati Foods’ co-founder and CEO, said in a statement, “Breaking ground on the Cultivate Next venture fund is an important signal of Meati’s industry leadership potential and new investments like this will help us scale operations and our mission-driven team.”

Meati, for example, earlier this year appeared on the menu at the Colorado-based concept Birdcall in the form of a crispy cutlet topped with Asian slaw, wontons, General Tso sauce and sriracha aioli.

Chipotle has experimented with various plant-based proteins, including a pea-based chorizo product earlier this year. For years, the chain offered a spiced tofu option on the menu called Sofritas. Company officials did not say whether Meati products will appear on the menu.