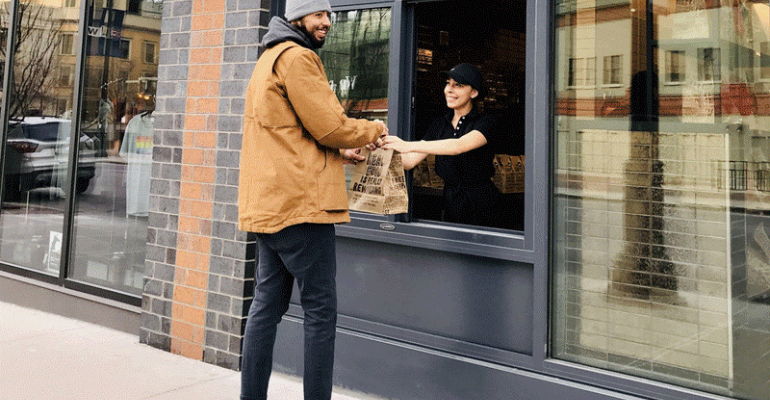 Chipotle Mexican Grill
This Chicago unit was the first to test a walk-up window in a new location. It opened in late 2019.
News>Fast Casual

Along with Chipotlane conversions, this new format could help boost sales, margins from current portfolio

New restaurants for Chipotle Mexican Grill will very likely include a drive-thru Chipotlane or potentially a walk-up window to speed throughput and add convenience. Now the fast-casual chain is looking at converting existing units to drive sales with these margin-boosting features.

Tabassum Zalotrawala, Chipotle’s chief development officer, said in an interview Wednesday the chain is looking to optimize its existing 3,000-unit portfolio, first to assess whether it’s possible to add a drive-thru Chipotlane.

Over the past three years, the chain has added the drive-thru option to about two dozen restaurants, and another dozen are scheduled for conversion this year, she said.  So far, Chipotle has found that adding a Chipotlane to an existing unit can increase sales by 5% to 6%, compared to the unit’s pre-drive-thru-lane performance.

But some locations simply cannot accommodate a drive-thru lane, Zalotrawala said. So now Chipotle is testing another conversion option: Adding a walk-up window.

“We started thinking about locations that can’t accommodate a Chipotlane, where there’s not the space for it. These are urban, but have a lot of foot traffic,” she said. “Generally, those units in an urban environment are spaces that are physically smaller, longer, or with narrower storefronts. So we thought what if we added walk-up windows, like a human lane, if you will, so if you were a customer that used the app and ordered ahead, you had no reason to go inside the restaurant, particularly those smaller footprints where you might find some congestion.”

This week, the first walk-up window in an existing unit will debut in Gainesville, Fla., near the University of Florida campus. It was not possible to add a Chipotlane there, but the unit has tremendous foot traffic and was ideal for a walk-up window test.

“This is a pilot location. We will probably test a few more using our Stage Gate process,” said Zalotrawala. “The preference for ongoing conversion will always be a Chipotlane versus walk-up window. What I’m trying to prove out is the hypothesis that the walk-up window is a good alternative when a lane isn’t possible, and it’s an investment that has good returns.”

Chipotle has opened several new restaurants that included a walk-up window, which was first tested in Chicago in late 2019. Several new units in the New York area, for example, have walk-up windows. There, Zalotrawala said, “adding that window clearly provided the convenience customers were looking for.”

Adding a walk-up window to an existing restaurant is a lower-cost investment than adding a drive-thru, in that it doesn’t require building a concrete pad for vehicles. But from the perspective of the restaurant interior, conversion costs are about the same. The walk-up window requires a bump out of space to accommodate the beverage machines, equipment for making quesadillas and the digital make line, for example.

Making it even more complex is that walk-up-window conversions can be accomplished without closing the restaurant, if construction can be done primarily during off hours. It can also be done over the course of about two weeks, she said. That's longer than it would take if the restaurant closed entirely for construction, but closures have the risk of disrupting consumer habits.

It's too soon to say how many existing units might add walk-up windows, she said, but — between the lanes and the windows — the conversion options have the potential of boosting margins, even as the chain continues its drive to reach 7,000 units across North America.

The Newport Beach, Calif.-based chain plans to add 235 to 250 new restaurants this year, and about 80% of those will have Chipotlanes.

Now, as the company looks at the existing restaurants, the first question will be whether it can physically add a Chipotlane, or even be relocated to add drive-thru access.  If not, then the company might assess whether a walk-up window conversion might be a fit.

If neither feature would be the right fit, Zalotrawala said then the company might look at adding a seam location. That could be a “digital-forward” smaller version of a Chipotlane with less dine-in seating, located nearby.

That option is a bit different from a Digital Kitchen unit, which has no front line or in-store ordering, a format that might also be considered as a seam location, she said. It just depends on the trade area.

“This is all part of and under the premise of increasing access and convenience for our customers,” she said. “At the end of the day, if our customer satisfaction scores go up, as a result of them having a more convenient experience, and if restaurant sales increase, margins increase, it’s done. Then we’ve proven it.”