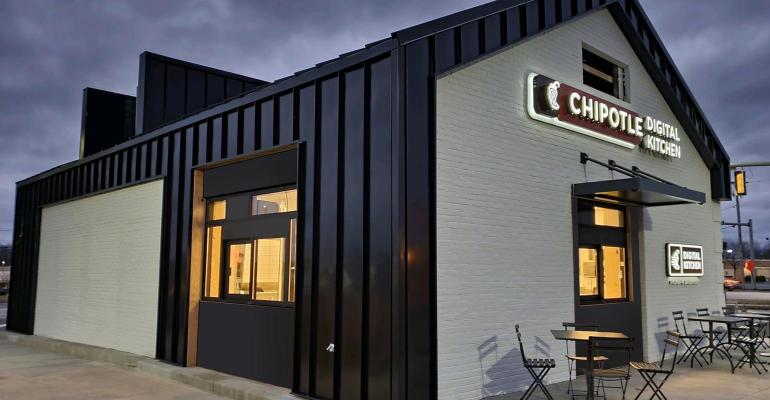 Chipotle Mexican Grill
Chipotle expects to open between 235 and 250 new restaurants this year, including 80% with a Chipotlane.
News>Fast Casual

The 4% price hike on average helped offset food costs that are expected to remain high, but stable, through the end of 2022

Chipotle raised menu prices about 4% at the end of the first quarter to help offset costs that Hartung said were the highest he’d seen in a one-year period, with food costs up 12% to 13% during the quarter. That inflation is expected to remain a challenge for the rest of the year, he added.

“Gosh, I really hope we don’t have to take more pricing,” he said, but added, “If [inflation] moves and we can’t find efficiencies to offset it, the good news is we have pricing power to make a move.”

As prices have crept up at Chipotle, Niccol said the chain has seen little resistance from guests.

During the first quarter, in-store sales grew 33%, which meant entrees-per-ticket declined somewhat, since in-store orders tend to be individuals, and digital orders tend to be larger and include add-ons, like queso and quacamole. So the average check was down 6%, but the number of transactions increased 5%.

For the quarter, same-store sales increased 9% and the company projected comp sales will reach double digits — in the 10% to 12% range — in the second quarter.

The menu price increase also helped Chipotle offset higher labor costs, which were 26.3% for the quarter, up by about 140 basis points. The price hikes and seasonally higher sales will bring that down to about 24% for the second quarter, Hartung said.

Hartung said Chipotle is “back to business as usual” on the labor front, with units about 85% to 90% fully staffed.

The chain is employing a new labor-scheduling tool that will help ensure “the right people are in the right positions at the right time,” said Niccol, and more labor-supporting innovation is coming.

A new artificial intelligence-based Learning Management System, called Spice Hub, is also rolling out to offer more training opportunities, for example. And Chipotle will soon start testing the use of a tortilla-making robot named Chippy in a Southern California restaurant with the hope the automation will take an undesirable task off the to-do list for human workers.

In May 2021, Chipotle increased the average minimum wage to $15 per hour, and the company is emphasizing the career path opportunities, which is crucial as the chain accelerates new unit openings to between 8% to 10% growth per year. In 2022, Chipotle expects to open between 235 and 250 new restaurants, with at least 80% including a Chipotlane.

“We believe our team members of today will be our leaders of tomorrow, and we are looking for them to grow with us,” Niccol said.

“Opening 8% to 10% new restaurants per year means we need more crew, more GMs, more field leadership. In fact, team members can advance to restaurateur, the highest general manager position, in as little as three-and-a-half years, with average compensation of $100,000, while leading a multimillion-dollar growing business,” he added. “And it doesn’t stop there. A GM can become a certified training manager, a field leader, a team director, and a regional vice president. In fact, we just recently promoted an individual to regional vice president who started as a crew member, and he’s the second one of our regional vice presidents to share this incredible trajectory.”

Hartung said that there is “noise” in the industry about higher interest rates impacting real estate. But Chipotle is not slowing down.

“We have a strong balance sheet. We know we have strong economics, and we’re in this for the long haul,” he said. “If anything, there’s opportunities because others do pull back. Let’s take that as an opportunity to go faster, not slower.”