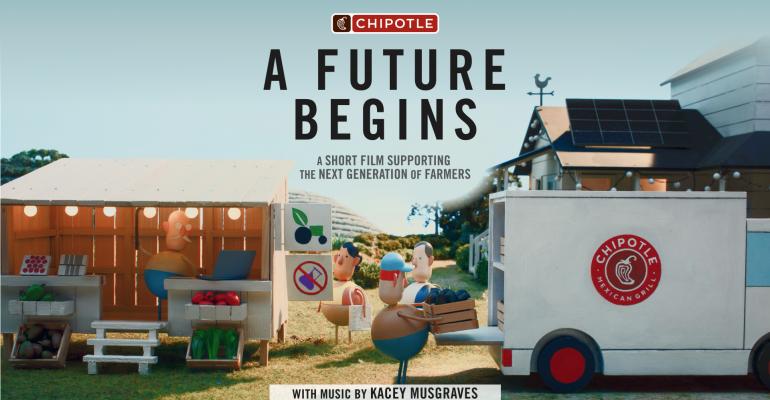 Kacey Musgraves provides the soundtrack for ‘A Future Begins,’ latest in the chain’s animated shorts

Like previous releases, the new short film that debuted Tuesday is called “A Future Begins,” and is an ode to the small family farmer trying to cope with a changing climate. It is a sequel to the 2011 film “Back to the Start,” featuring Willie Nelson singing the Coldplay release “The Scientist.”

Related: Chipotle brings its annual Boorito promotion to the metaverse through Roblox

The new version, however, offers a more hopeful look at the future of farming and planet-saving initiatives that will have a lasting impact on the way food is sourced. Over the last decade, the U.S. lost more than 20 million acres of farmland, a trend that continues at an average rate of 2 million acres per year, the company said. The message is that Chipotle supports a next generation of farms that prioritize environmentally friendly practices.

Chipotle, for example, supports the National Young Farmers Coalition and its advocacy for policy changes in the 2023 Farm bill that would facilitate equitable access to up to 1 million acres of land. Chipotle has launched a petition campaign to urge Congress to invest $2.5 billion to the effort. Guests can also support the coalition by rounding up their change to donate through the end of November.

And Chipotle has pledged $5 million over the next five years to support young farmers (under age 40) that support its Food With Integrity standards by helping them secure long-term contracts. The chain is also working with the Young Farmers Coalition to fund an annual Seed Grant program to help those who are starting or building  their farms.

On Friday, Chipotle is also dropping a line of limited-edition clothing pieces, including a custom apron, jacket, hat and variety of patches, to raise money for young farmers.

The Newport Beach, Calif.-based chain has a long history of animated-film messaging, including “A Love Story,” which debuted in 2016 and focused on Chipotle’s fresh, wholesome ingredients.

Before that, in 2013, the chain took a somewhat darker turn with “The Scarecrow” — with its menacing CrowBots and Fiona Apple singing “Pure Imagination”— which was also tied to a video game.