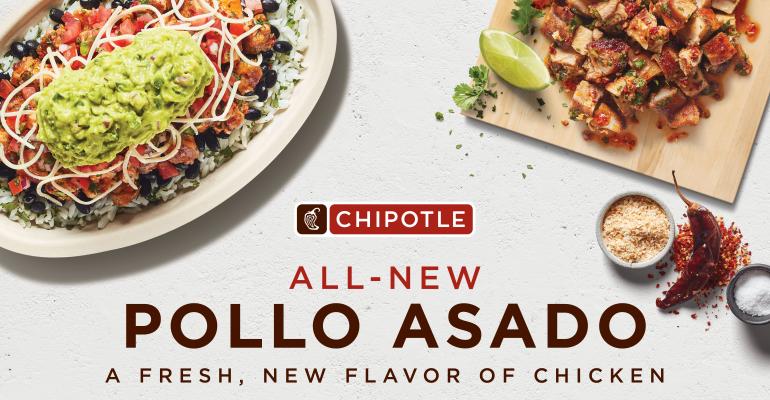 Chipotle Mexican Grill is testing a new chicken recipe for the first time in 28 years.

The Newport Beach, Calif.-based chain said Tuesday it is testing Pollo Asado for a limited time in 95 restaurants in Cincinnati, Ohio and Sacramento, Calif.

The Pollo Asado is described as having a dry rub of cumin, guajillo peppers and coriander. It is seared on the grill, hand cut and finished with garlic, chiles, lime juice and chopped cilantro.

“Chicken has long been the top protein choice among Chipotle guests,” said Chris Brandt, Chipotle’s chief marketing officer, in a statement. “With the celebrated Adobo chicken recipe already on our menu, we decided it was time to add another option and our new flavorful Pollo Asado chicken is another perfect complement to our real ingredients.”

The move comes as Chipotle winds up its popular LTO of Smoked Brisket, which was rolled out in September, but will be pulled sooner than expected as supplies run out. Company officials say they will consider whether to bring the smoked brisket back in future, but, with beef prices rising, the test of chicken is not surprising.

As with other new menu items rolled out this year — including cilantro-lime rice and a quesadilla — Chipotle is using its “stage-gate” testing process to assess feedback before deciding whether to add it to the menu, the company said. A plant-based chorizo is also in test in Denver and Indianapolis.

Where it is available, Chipotle is offering the Pollo Asado for a “$0 delivery fee” Nov. 8-14 if ordered through the chain’s website or app, which means it isn’t exactly “free” since menu prices are higher for delivery and there are additional service fees at checkout and other parameters.