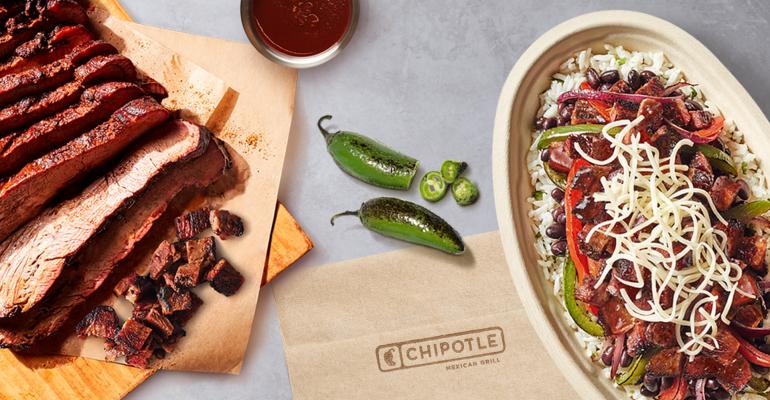 Menu price increases taken over the past year helped Chipotle Mexican Grill protect restaurant margins during the third quarter and officials are evaluating whether more hikes are needed, the company said Thursday.

Over a little more than a year, the chain’s menu prices have increased roughly 17% in phases and focusing on certain parts of the menu — like delivery. During the Sept. 30-ended quarter, that pricing helped bring food, beverage and packaging costs down by about 200 basis points to 30.3% of revenue, despite higher labor costs and inflation on beef and freight.

But Brian Niccol, Chipotle’s chair and CEO, reiterated during a call with analysts that the brand continues to have pricing power and a strong value proposition — though they intend to be patient in considering whether that move is necessary given some inflation pressures are likely temporary.

“In the event that we need to pull that pricing lever, we have the ability to do it,” said Niccol.

While COVID impacts are expected to persist for a few more quarters, Niccol said, “The worst is behind us.”

Niccol said about 80% of dine-in guests are back, while digital sales remained a relatively strong part of the mix, growing nearly 9% year over year to $840 million, representing about 43% of sales.

“We’re pleased to see our digital sales dollars continue to grow, despite lapping tough comparisons,” Niccol said. “In fact, year-to-date digital sales of nearly $2.7 billion are just slightly below the $2.8 billion we achieved during all of last year.”

Same-store sales increased 15.1% for the quarter compared with a year ago, when the COVID-related restrictions were eased through much of the country.

Niccol attributed that increase in part to new menu items, like the popular smoked brisket launched in September, as well as the Cilantro-Lime Cauliflower Rice and quesadilla launched earlier this year

At an average cost of about $10.25, the smoked brisket is more expensive than most proteins on the menu, but Niccol described it as a hit, saying early feedback has been very positive and that it has increased both check size and transactions.

Plant-based chorizo is being tested in a couple markets, he said, and the team is working on more new menu items, though he did not hint what’s coming.

The chain opened 41 new restaurants during the quarter, including two relocations, bringing the total count to 2,892, and 36 of those new units included a Chipotlane drive-thru, which continue to perform very well, Niccol said.

International expansion offers another opportunity for the brand. Niccol said the company plans to accelerate openings in Canada, and the first Chipotlane unit is scheduled to open there next week.

But given delays in construction and supply because of shipping issues globally, the company declined to offer guidance on unit growth for 2022 at this point.

Niccol said the Chipotle Rewards program, with 24.5 million members, has “moved from crawl to walk stage,” and offers another opportunity for sales growth, as those members tend to visit more often and order more food.

During the quarter, for example, Chipotle rolled out a new Extras feature of the loyalty program to gamify how rewards are earned in an effort to “supercharge the superfans.

Niccol said a goal is to move more guests from ordering in-store to ordering ahead through digital channels, which tends to have higher margins.

The time from digital ordering to food pick up is now less than 10 minutes, he noted, down from 12 minutes or so a few quarters ago.

For the quarter, revenues increased 21.9% to nearly $2 billion.

CORRECTION: This story was updated to clarify the adjusted net income for the quarter.