/sites/all/themes/penton_subtheme_nrn/images/logos/footer.png
Recent
Recent
Why McDonald's marketing is so powerful
Feb 01, 2023
How Black Bear Diner plans to stick to its roots as it expands
Jan 31, 2023
Local Kitchens continues expansion with five new locations coming to Northern California
Jan 31, 2023
How restaurants are getting ready for the Super Bowl
Jan 31, 2023
New for restaurant labor in 2023? Optimism.
Jan 30, 2023
Featured
The emergence of mocktails
Jan 23, 2023
36 restaurant industry predictions for 2023
Dec 21, 2022
10 restaurant chains making waves in the breakfast space
Dec 14, 2022
How eco-friendly Seattle restaurant chain Just Poke is doubling in size in 2022
Nov 17, 2022
Breakout Brands
brought to you by
News>Fast Casual 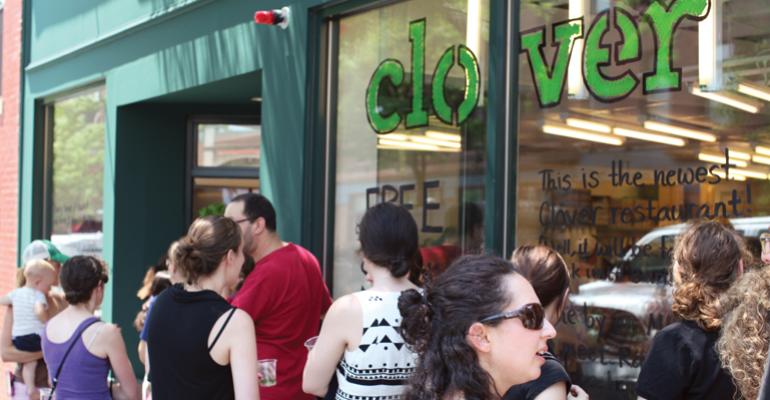 Clover Food Lab, a farm-to-table brand in the Boston area, embeds itself into the lives of its customers, providing meals 24 hours a day in some cases and even catering weddings and other life celebrations with its original food truck.

The Cambridge, Mass.-based Clover, which began as a food truck in 2008, has grown to 13 units, with two of those in Whole Foods groceries and another two outlets at Harvard University’s library.

The vegetarian-focused restaurant has drawn the interest of seasoned restaurateurs, including an investment from Panera Bread founder Ron Shaich, and has proven to be strategic and tech savvy.

Lucia Jazaveri, Clover’s creative director, said the restaurant has become a “life-cycle brand.” And it works its way into the pockets of its fans through a smartphone app, designed in-house and launched last February, and even on social media. For example, she said, every Tuesday at 3 p.m. the company hosts a food-development meeting at a restaurant, which it opens to the public and broadcasts live through its 11,200 followers on Instagram.

Clover’s stand-alone restaurants average about $1.7 million in sales in 1,300 to 1,800 square feet, with a blended average check of $10 to $11, including beverages, according to founder and CEO Ayr Muir. With communal tables as well as two and four tops, average seating is nearly 100 in the stand-alone stores. Most stores are open 7 a.m. to midnight daily, with one location, on Boston’s Central Square, open 24 hours.

All in-store orders are taken on iPads, through which employees can change digital menu boards when items run out.