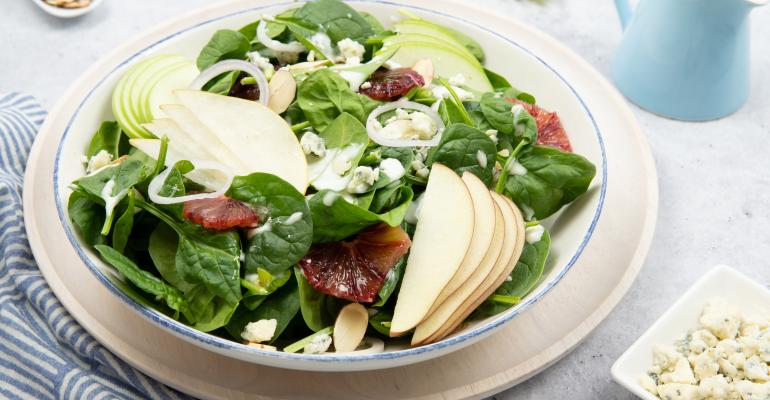 From beet burgers that bleed like beef to cashew cheese that melts like fresh mozzarella, more diners are seeking plant-based foods. No longer just for the health-minded set, eating plant-based products has gone mainstream.

According to global market research firm The NPD Group, 16% of consumers have had some form of plant-based alternative recently, whether a dairy or meat alternative.

And it’s a practice that is growing. According to The Hartman Group’s Health and Wellness 2021 report, 36% of consumers say they are adding or increasing more plant-based protein in their diet.

Restaurants that offer plant-based options, therefore, stand to reap a wide range of benefits. Here are the top five:

With shipments of plant-based alternatives from broadline foodservice distributors to commercial restaurants up 30% year over year, it’s clear consumers aren’t just saying they will increase their consumption of non-meat meals, they’re actually doing it. And that has translated to increased sales for restaurants.

According to the 2020 Deep Dish report from delivery giant DoorDash, vegetarian foods are steadily growing in popularity. For example, in 2020 order frequency of black bean tacos increased 456% over the year prior. During the same period, plant-based burgers and mushroom burgers grew 225% and 195%, respectively.

Additionally, over the last few years major chains such as Domino’s and Papa John’s have reported a surge in sales following the launch of vegan options.

When plants are on the menu, more customers frequent restaurants. According to the latest data released by Foodable Labs, U.S. restaurants that have added vegan options to the menu reported a 13% increase in customer traffic, despite a decline in overall restaurant traffic.

Not only do plant-based offerings drive visits, but they can also attract consumer trial. In the last few years, restaurants such as Pret a Manger and Umami Burger have reported that adding vegetarian offerings attracted new customers to their brands.

While menuing plant-based foods can meet consumers’ new demands, they can also be a bonus for an operator's bottom line.

A restaurant’s food cost for plant-based entrées is just 15 percent, compared to about 30 percent for meat entrées. The significantly lower food costs for plant-based entrées can be attributed to the fact that foods such as protein-rich legumes and grains cost less, have a longer shelf life and are subject to fewer fluctuations in price than most animal proteins.

While some plant-based meat is priced at a premium, consumers have thus far been willing to pay more. However, experts expect these products to decline in price as they become more widely consumed.

Plant-based foods appeal to a broad range of consumers, but those most likely to purchase them are millennials and Gen Z.

These days the battle for share of stomach is coming from every direction: brick-and-mortar restaurants, virtual brands, delivery-only brands, convenience stores and meal-kit companies, to name a few.

Incorporating plant-based options into restaurant menus can be an important part of a successful differentiation strategy. By offering these items operators can add interest to their menu, eliminate the veto vote, and align their brand with consumers’ values, such as health and wellbeing, animal rights and sustainability. Plant-based options also open up an opportunity for innovation, to develop menu items that can grab attention in the press and on social media channels.

Mix up the menu

All of which isn’t to say that restaurant operators should remove meat from menus. Instead, operators should consider adding more alternatives to better meet consumers new demands. For example, adding vegetarian or flexitarian entrée salads, swapping out the meat for a meatless ingredient in a popular dish, or increasing the amount of vegetables served with meat are just a few simple ways restaurants can capitalize on consumers’ cravings for plant-based foods.

When it comes to developing these and other plant-based menu items, many restaurant operators are turning to foodservice manufacturers for insights into the latest consumer preferences and new product lines. Even when business is booming, these savvy operators know there’s never a good reason to pass up a chance to appeal to more customers, increase their profit margins and set their brand apart from the crowd.