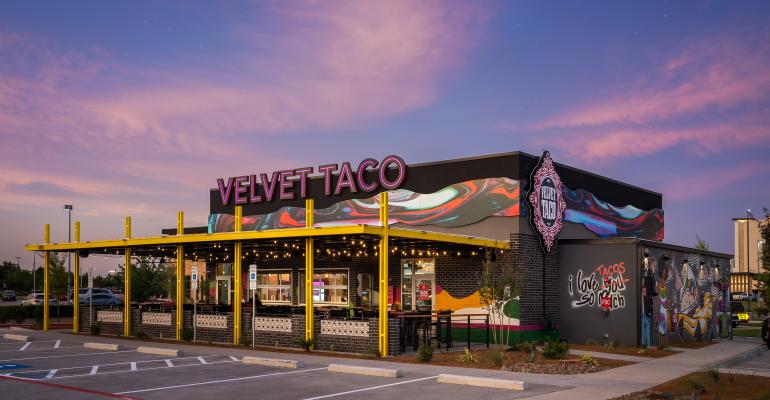 Velvet Taco, the fast-casual concept, opened its 34th unit Monday in the Grandscape development in The Colony, Texas, expanding its emphasis on drive-thru pickup and patio seating.

The brand, which recently announced it would be moving its headquarters from Plano, Texas, to Far North Dallas, opened the new restaurant in a space that covers 2,388 square feet and has seating for 44 in the dining room and 70 on the patio.

The newest location features four hand-painted murals on the exterior, the largest of which pays homage to the restaurant’s home in Grandscape, a new mixed-use shopping, dining and entertainment destination in the community north of Dallas.

Eric Thompson, general manager of the Grandscape Velvet Taco, said in a statement: “Our menu and electric vibe will become a gathering place for all members of this community.”

Like all Velvet Taco locations (excluding food halls), the menu features more than 20 tacos, sides, red velvet cake and their Weekly Taco Feature. The drive-thru is available for orders made on the smartphone app. Hours are 11 a.m. to 11 p.m. on Sundays through Wednesdays, to midnight on Thursdays and to 2 a.m. Fridays and Saturdays.

Velvet Taco, founded in 2011, was named a Nation’s Restaurant News Hot Concept in 2016.