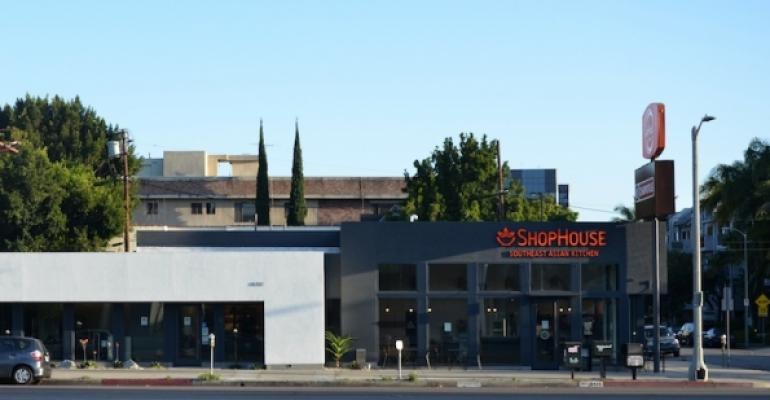 The new restaurant in West Hollywood is the first to share a property with sister-brand Chipotle Mexican Grill. The two restaurants are side-by-side in a standalone building with shared patio seating, though they operate separately.

Historically, ShopHouse units have been located near Chipotle restaurants because they share the same customers, but this is the first in such close proximity, said Tim Wildin, brand director for ShopHouse, who has been closely involved with the brand since its conception. Wildin’s mother is Thai and he has spent a lot of time in Bangkok, where shophouses are multi-story buildings in which families operate a restaurant on the ground floor and live upstairs.

Founded in 2011 in Washington, D.C., the secondary concept owned by Chipotle Mexican Grill Inc. was designed to apply to Southeast Asian food the same model used at the burrito chain: sustainable ingredients served in a fast-casual, build-your-own format with a culture that aims to foster leaders from within.

The concept is now in Washington, Los Angeles and Chicago, and Wildin said growth plans include more locations in those markets, though he could not say how many.

Meanwhile, Denver-based Chipotle is struggling to regain traffic and sales lost after repeated episodes of foodborne illness were reported in the second half of 2015. Same-stores sales declined nearly 30 percent during the company’s March 31-ended first quarter, though officials say the worst has passed and sales trends are improving with the help of coupons and free-food offers.

Wildin said he could not comment on ShopHouse’s sales specifically, or whether consumers have made a connection between the two brands from a food-safety standpoint.

Chipotle’s new stricter food-safety protocols will likely benefit ShopHouse for ingredients that are shared between the two brands, like cilantro. But, unlike Chipotle, more of ShopHouse’s menu is cooked, which would inherently reduce any potential food-safety risk, he noted.

Wildin said company officials have been encouraged by sales trends at ShopHouse that so far have mirrored the early success of Chipotle.

And that success has occurred in a very different climate than when Chipotle began in 1993, he said.

“When Chipotle first opened, there was no internet,” Wildin said. “And Chipotle grew up in a fast-food desert. Now everyone is doing something similar.”

Despite the many Chipotle-model copycats, Wildin contends ShopHouse’s food sets it apart from the fast-casual crowds.

“No one else out there is doing Southeast Asian food and serving it the way we do,” he said. “We’re seeing new customers month over month. We are definitely headed in the right direction.”

Like Chipotle, the meat at ShopHouse is responsibly raised without antibiotics or growth hormones, produce is organic where possible, most ingredients are not genetically modified, and the menu is largely wheat and gluten-free.

ShopHouse’s menu has evolved over the years and the concept has honed its lineup to ensure that the food appeals to a broad audience and can be executed at the high level to set the brand up for growth, said Wildin.

Customers can choose between a base of jasmine rice, brown rice, chilled noodles or salad; then add protein options like grilled chicken satay, steak laab, pork and chicken meatballs or organic tofu. Next comes the choice of various wok-cooked vegetables; sauces and garnishes like green papaya slaw or picked vegetables. On top might go options like toasted rice, crushed peanuts, chili paste or crispy garlic. Most dishes are priced under $10.

At the new West Hollywood location, ShopHouse officials are testing the addition of fried spring rolls served with a chili-lime dipping sauce for $3.25, which is the only item that is not wheat or gluten-free.

With ShopHouse, Chipotle wanted to demystify the flavors and ingredients of Southeast Asian cuisine and make it more accessible, said Wildin.

After ShopHouse was first launched, some guests said the food was too spicy, said Wildin.

“But now we’re doing a better job of communicating spice levels and positioning the menu with things like house favorites, with combinations that we feel are really good, to help people make better choices,” he said. “But we haven’t dumbed the food down at all.”

The house favorites give first timers a way in without having to make decisions. Once they become familiar with the flavors, ShopHouse guests then tend to shift to more customization on later visits, he said.

“A lot of people might not know what Southeast Asian food is, so we have an interesting conundrum in that, once you taste it, it’s great, but most people don’t really have a reference point to start with,” he said.

ShopHouse is also better positioned for growth, now that the chain has developed some leaders through its restaurateur program, which, like at Chipotle, recruits restaurant managers from within.

Aileen Parada, for example, the general manager of the new West Hollywood location, got her start at the chain’s first Los Angeles location, which opened in June 2013.

ShopHouse is still considered a “growth seed” within Chipotle Mexican Grill Inc., Wildin said, but 14 of the chain’s 15 locations opened over the past three years.

“To me, that’s quite fast,” said Wildin. “It has been challenging, and one of the challenges has been developing top-performing people to lead these efforts and run these restaurants.”