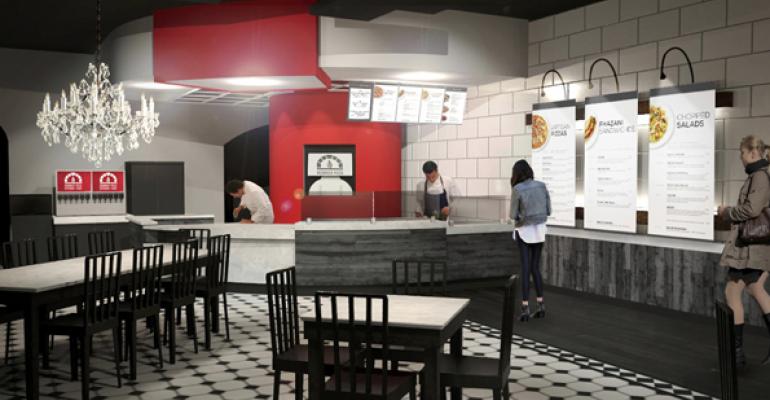 <p>RedBrick Pizza appeals to families with children and tends to be in more suburban locations.</p>
News>Emerging Chains

The parent to the Red Mango frozen yogurt chain has formed a new multi-concept franchising company that also plans to grow its Smoothie Factory and RedBrick Pizza brands, the company said Tuesday.

The three all-franchised brands will be housed under Dallas-based BRIX Holdings LLC, a newly formed company that owns 100 percent of Red Mango and Smoothie Factory, and an 80-percent stake in RedBrick Pizza.

The goal is to reinvigorate early-stage brands that may have lacked the funding or resources to grow, said John Antioco, chairman of the board for BRIX Holdings and its primary shareholder. More concepts may also be added.

“Recognizing that there are numerous existing brands in the marketplace that are past the initial concept stage without the necessary ingredients to capitalize on their growth potential, BRIX Holdings was established to add the knowledge and resources needed to create that growth and business success,” Antioco said in a statement.

Antioco, who previously served as chair of Taco Bell Corp. and was chair and chief executive of the video-rental chain Blockbuster, first invested in Red Mango in 2008 with private-equity firm CIC Partners.

Jim Notarnicola, BRIX vice president of marketing and franchising, said the company set out to restage the two brands and expand them. BRIX has already developed new prototypes for both Smoothie Factory and RedBrick Pizza, and is exploring dual-branding and crossover opportunities.

The nearly 300-unit Red Mango chain, for example, which is known primarily for its frozen yogurt, has been testing co-branded units with Smoothie Factory that would help build smoothie sales.

Red Mango has also been developing a café concept in some locations with a menu that also includes light food offerings.

Conversely, Smoothie Factory locations are testing the addition of a small Red Mango frozen yogurt component in some units, said Notarnicola. The frozen yogurt and smoothie brands could also be placed near RedBrick Pizza locations with some shared space to better leverage real estate, he said.

Smoothie Factory, which was founded in 1996 by former Olympic athlete Jim Villasana, will also broaden its menu to include freshly squeezed fruit-and-vegetable juices. The smoothie chain, which is largely located in Texas, has long pursued locations near fitness centers, Notarnicola said, but the new juice offerings will give the brand wider appeal and open up more real estate opportunities.

The new prototype has an updated décor with sit-down space so guests can enjoy the “theater” of their smoothie or fresh juice being made, he said.

Mostly operated in California with a few units in Florida, RedBrick was appealing as a fast-casual brand offering baked-to-order artisanal pizzas in the $8 to $10 range, Notarnicola said.

“What we really liked about RedBrick is that they were ahead of the trend with artisanal pizza. The dough is made on premises and the pizzas are cooked in a high-temperature, gas-fired oven,” he said. “There’s a set menu, but customers can also build their own.”

The concept, which offers dine in and take out, appeals to families with children and tends to be in more suburban locations. BRIX, however, is updating the décor with a look that would also work in more urban spots, he added. Founder Jim Minidis and his family have retained a 20-percent stake in the brand.

Notarnicola said the plan is to open about 25 new locations each for Smoothie Factory and RedBrick over the next 12 months. Red Mango will continue on its growth path of about 15 to 25 new units per year.

The founders of each of the three brands, including Red Mango founder Dan Kim, will also stay on in consulting roles with the new company and to help with product development, said Notarnicola.