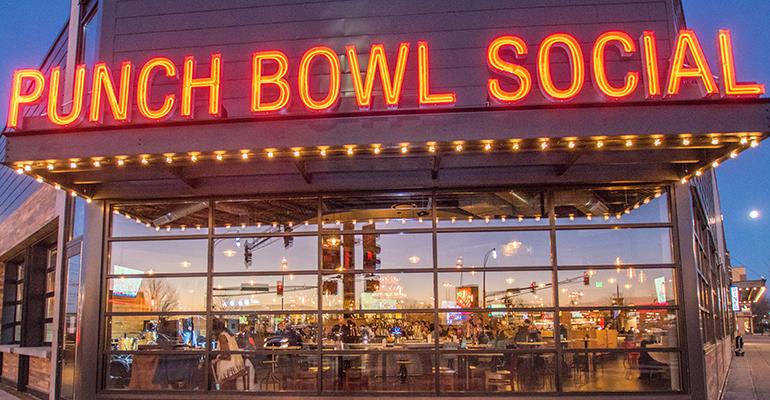 For the past five years, Robert Thompson has spent much of his time working to finance the expansion of Punch Bowl Social — not an easy task for the chain of 24,000-square-foot eatertainment complexes.

On Monday, the founder and CEO got some breathing room with a “significant investment” from the private-equity firm L Catterton. The deal should help nine-unit Punch Bowl Social fund further growth without complex financial maneuverings.

“I’m at a place now where I can do my day job, which is growing a great American brand and developing an organization,” Thompson said in an interview.

“It’s a seminal moment in the company’s growth,” he added. “There’s concept creation and this moment.”

In Punch Bowl Social, L Catterton gets a piece of one of the more innovative brands in the restaurant industry. The concept has become a destination for younger consumers looking for an experience in addition to a meal.

Thompson opened the first Punch Bowl Social in Denver, in 2012. The experienced restaurateur wanted to bring better food and cocktails to the dining-and-entertainment space, where games are typically the primary, and more profitable, attraction.

“Serving good food is the most important thing we can do on a day-in, day-out basis,” Thompson said. “You have to have good food.

Punch Bowl Social has grown steadily, expanding into Cleveland, Detroit, Indianapolis and Minneapolis. The company has been looking to speed up growth.

“Punch Bowl Social is a unique dining experienced unmatched by other traditional eateries,” Jon Owsley, co-managing partner of L Catterton’s Growth Fund, said in a statement. Plus, the chain has “proven success with the Millennial consumer,” he said.

“Things are going well,” Thompson said. “We’ve been fortunate to differentiate ourselves within this eatertainment and experiential dining category.”

The investment is the latest deal from L Catterton, one of the most active investors in the restaurant space. The firm has aggressively taken stakes in some of the country’s most notable growth concepts. Investments have included Hopdoddy, Chopt Creative Salad Company, Piada, First Watch, Velvet Taco, Anthony’s Coal Fired Pizza and P.F. Chang’s.

Punch Bowl Social worked with Raymond James & Associates on a financial advisor as the chain looked for financing. But the chain has been eyeing a relationship with L Catterton for the past four years.

“We’ve stayed in touch over the last few years, even on a non-investing basis,” Thompson said.

Private-equity groups and other investors have been pouring money into upstart chains in recent years. And many entrepreneurs like Thompson find themselves besieged by requests when the concepts are as small as one unit.

Punch Bowl Social has been a known commodity for years now — it was a 2015 Nation’s Restaurant News Breakout Brand — but the company has resisted the temptation to take financing until now.

“We’ve had dozens of conversations over the years,” Thompson said. “That’s gotten fairly hot over the last year.

“Frankly, none of those conversations, with all due respect to the others, none had risen to the level of L Catterton. They simply are the best in class. We’re blushing a little bit.”

Punch Bowl Social is expanding even as consumers shy away from dine-in restaurants, largely because of the combination of food quality and entertainment.

“We are going to take market share,” Thompson said, but he was also honest about the chain’s future.