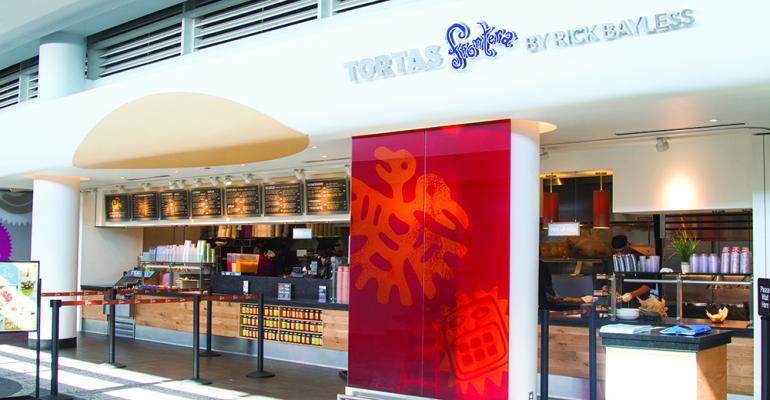 Jollibee paid $12.4 million for the stake in Tortas Frontera, which is an offshoot of Bayless’ Frontera Grill and Topolobampo portfolio, the Nikkei Asian Review reported. Jollibee officials indicated the goal was to get a toehold in the Mexican restaurant business.

Tortas Frontera, first opened in January 2011, has four restaurants, with three outlets at Chicago’s O’Hare International Airport and one at the University of Pennsylvania in Philadelphia.

“Together with [Bayless’s] organization and brand, Tortas Frontera, we will build a significant business in the large and fast-growing Mexican-food category in the United States," said Tony Tan Caktiong, Jollibee’s chairman, in a statement to the Philippine Stock Exchange.

Messages were left with Jollibee’s U.S. office and sent to Bayless’ organization, but neither had responded by press time.

Pasig, Philippines-based Jollibee has been expanding its holdings in the United States.

In February, Jollibee increased its investment in Denver-based Smashburger, acquiring an additional 45 percent of the company in a $100 million transaction.

The deal increased Jollibee’s stake in the “better burger” chain to 85 percent. Jollibee acquired 40-percent ownership of Smashburger in October 2015, which then valued the company at $335 million.

Jollibee, which runs a burger-and-fried chicken chain of the same name, owns various restaurant brands. It has more than 4,270 restaurants globally.

As of June 30 in its home country, Jollibee Foods Corp. operated 2,957 restaurants, including such brands as the 1,094-unit Jollibee, as well as Chowking Greenwich, Red Ribbon, Mang Inasal and Burger King franchised units. It reported 1,322 restaurants outside the Philippines across Asia, the Middle East and the United States.