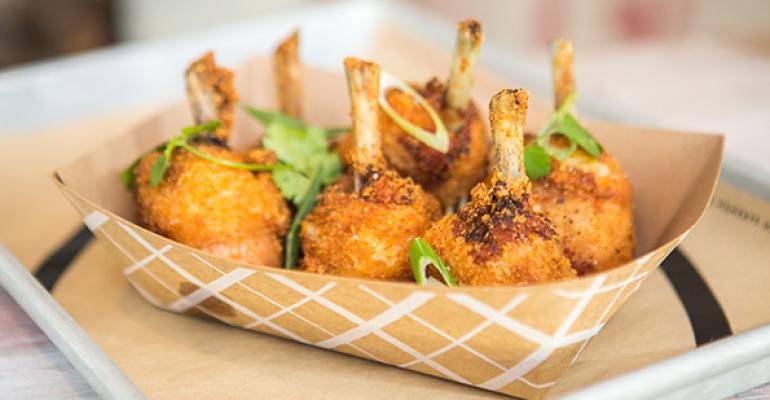 Six months after its debut in San Diego, in November, The Crack Shack is hatching plans for growth.

The “fine casual” chicken-and-egg concept was born in a corrugated metal shed on property next to the fine-dining restaurant Juniper & Ivy, owned by Michael Rosen and “Top Chef” all-star Richard Blais.

After Juniper & Ivy opened in 2014, the partners noticed the rusted shed next door getting attention from customer. It had a certain chic to it, and people would stop and take photos in front of it, Rosen said.

“And that’s how Crack Shack was born,” Rosen said. “It was all about, ‘What are we going to do with this shed?’”

Rosen and Blais turned the shed into an open-air restaurant with picnic table seating that serves breakfast all day and has a full bar, a bocce ball court and an Instagram-friendly giant chicken. Customers order at the counter and food is delivered to tables.

The Crack Shack isn’t your typical fried-chicken joint. Customers can order five or 10 pieces of fried chicken with dipping sauces, as well as sandwiches like the Señor Croque with crispy chicken, bacon, fried egg, cheddar, and miso-maple butter on a brioche bun. The classic slaw includes kale, kimchi, agave mustard and celery-seed dressing. And starters might include “Mexican poutine,” or schmaltz fries served with pollo asado and jalapeño cheese whiz.

The concept was an immediate hit, Rosen said, garnering rave reviews and lines around the block. Three months of revenue including December, January and February totaled $1.4 million.

Now the partners are hoping to replicate the success, moving up the California coast.

A second Crack Shack is scheduled to open in Encinitas before the end of 2016, and a third is planned for Costa Mesa in March.

Rosen said the operators have learned a lot about executing a casual but premium menu under the crush of crowds.

“It’s one thing to have a chef that makes a dish turn out wonderfully for three people, and another to put out a consistent product for 5,000,” he said. “On a given day, we’re serving 300 orders of fries, and three or four sandwiches on the menu sell at 200 per day. We’re trying to bring a chef-driven and ingredient-driven approach to this segment of the market.”

Crack Shack’s fries, for example, go through a 24-hour process. Potatoes are cut and soaked in water to remove some starch, then drained and dried. They are cooked at low temperature in oil that has some schmaltz for flavor, then drained. To serve, they are cooked again at a higher temperature. The concept uses Fry Master equipment, which Rosen described as “the Lamborghini of fry machines.”

The Jidori chicken used is a vastly different product than mass-produced chicken used by quick-service chicken chains like KFC, Popeyes Louisiana Kitchen or Bojangles’, he said. “When you visit the poultry farms, you can really see the difference.”

Unsurprisingly, Crack Shack’s prices are also much higher. The average check is about $20 to $25 on average, including a beverage.

“We do charge more for chicken than other fast-casual chicken places,” Rosen said. “But I assure our patrons that our margins are no different than KFC’s. And I think we deliver great value.”

The restaurant’s bar also features about 20 local craft beers, a full cocktail program and wine, including champagne, which Rosen contends is a perfect match for fried chicken.

Rosen is pleased to see a broad spectrum of customers, young and old, with dogs and babies, at the restaurant, which is in San Diego’s Little Italy neighborhood.

“We didn’t want to have a restaurant that appealed to just hipsters or just families,” Rosen said. “We’re not targeting a demographic because, at the end of the day, who doesn’t like fried chicken, other than vegans and pescatarians?”

But Crack Shack has something for them too: a protein bowl or grilled tuna salad. Rosen calls the latter “chicken of the sea.”

Rosen noted that the chicken segment is becoming increasingly crowded. But so is the better-burger space, and that doesn’t seem to be hampering brands that bring something new to the table, he said.

The partners have received some grief for the restaurant’s name because of the drug reference. Rosen said it’s meant to reflect the vernacular of crack: something so good you can’t stop eating it.

“Before we opened, half the people said, ‘You’re crazy, the name is too edgy,’” Rosen said. “But it was better than some of our other options, like Mother Clucker.”