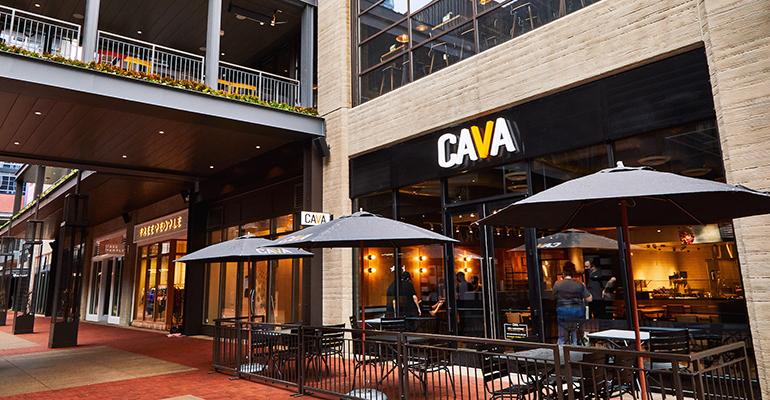 Fast-casual Mediterranean operator Cava Group has begun converting some of the Zoe’s Kitchen restaurants it acquired in 2018 to the Cava concept.

“Our goal has always been to bring Cava to more communities, and with the acquisition, we were able to strategically expand and diversify our real estate portfolio, unlocking significant value through scale and cost-effective real estate conversions,” Brett Schulman, CEO and co-founder of Cava, told Nation’s Restaurant News.

Washington, D.C.-based Cava features a food assembly line that allows diners to customize their orders from among an assortment of bases, spreads, proteins and toppings. The company’s $300 million acquisition of Zoe’s, based in Plano, Texas, grew the company from 66 to 326 locations across the U.S.

At the time of the purchase, Zoe’s had been considering the closure of up to 10 locations amid declining sales trends. Cava Group has been converting Zoe’s restaurants to its flagship brand during the last several months.

The company is on track to convert 12 Zoe’s Kitchen locations to Cava in the first half of this year, and plans to reveal “ambitious growth plans” in the coming weeks for the second half of 2021 and beyond, Schulman said.

“Conversions are an efficient, cost-effective means of market entry, as we repurpose a good deal of the existing restaurant infrastructure when converting to a Cava location,” he said.

One of the motivations behind the acquisition of Zoe’s was that chain’s presence in suburban communities, Schulman explained, noting that Cava had observed a shift toward suburban living before the pandemic began.

“As the pandemic accelerated the shift towards suburban life, with people moving from major cities at a faster rate than ever before, we were able to accelerate plans to convert Zoës Kitchen locations to continue meeting customers where they are,” he said.

The acquisition has also given Cava opportunities for menu synergies across the two Mediterranean-themed concepts. Last summer, for example, Cava introduced fire-roasted corn, which proved popular as a topping on the chain’s build-your-own menu.

As a result, Zoës Kitchen is planning to introduce new menu items this June inspired by Cava’s fire-roasted corn, Schulman said. The items will be tailored to fit the flavor preferences of Zoe’s customers, “leaning into our Mediterranean roots delivered with a Southern flare,” Schulman said.

Schulman said Cava had been well-positioned for the demands of the pandemic, given its extensive digital capabilities.

“Cava has been a digitally enabled brand since day one, and invested in access points pre-pandemic that now serve as a competitive advantage,” he said.

The company’s dedicated kitchens for digital off-premise orders, for example, which are separate from its in-store serving lines, and its digitally enabled drive-thru windows, which had been installed during the last several years, enabled Cava to quickly meet multi-channel demand fluctuations in the past year.

In addition, Cava launched a new app last year with a highly visual presentation that reflects the “walk-the-line” ordering experience of that customers have inside the restaurants.

“Guests shouldn’t have to sacrifice flavor discovery or the joy of customization while using digital ordering channels,” said Schulman. “Our goal is to radiate hospitality whether in-person or by digital means.”