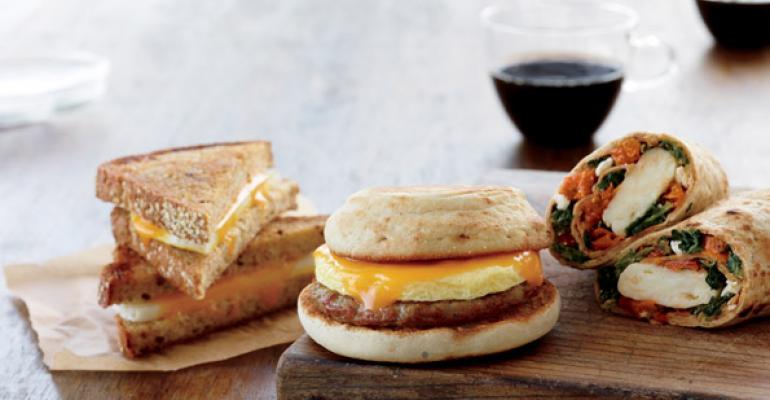 Taco Bell’s announcement last week that it would roll out breakfast to most of its 5,800 domestic restaurants has increased competition among quick-service restaurants in the morning daypart, and a number of chains that already serve breakfast are boosting their offerings.

Starbucks has added three new items to its line of breakfast sandwiches. The slow-roasted Ham & Swiss sandwich features those items and an egg on a croissant bun. The Vegetable, Egg & Fontiago on Multigrain Ciabatta is a vegetarian option made with spinach, sundried tomatoes and caramelized onions with melted aged Fontiago cheese. The Egg & Cheddar on Toast is served on multigrain bread.

The chain, which operates more than 11,000 units nationwide, has also has revamped its turkey bacon, cheddar and egg white sandwich. The item, made with cage-free eggs, is now served on a thinner, organic wheat English muffin. Prices vary by location.

Those moves follow the introduction earlier this year by 685-unit Einstein Bros. of the Thintastic bagel, a skinnier item with 35 percent fewer calories than its regular bagel. It’s available in plain, whole wheat and everything varieties.

Starbucks last year credited its food offerings with contributing 2 percentage points to its eight-percent growth in same-store sales for its domestic locations in its fourth quarter.

Dunkin’ Donuts has also added a new sandwich to its breakfast menu at its more than 7,300 domestic locations. The Eggs Benedict sandwich is made with Black Forest ham, egg and a Hollandaise-flavored spread on an English muffin.

Jack in the Box also introduced a new breakfast item at the beginning of the year: An Egg White & Turkey Breakfast Sandwich made with egg whites, grilled turkey, sliced tomato and American cheese on its classic bun. At the same time, the chain made egg whites available at all of its 2,250 domestic units.