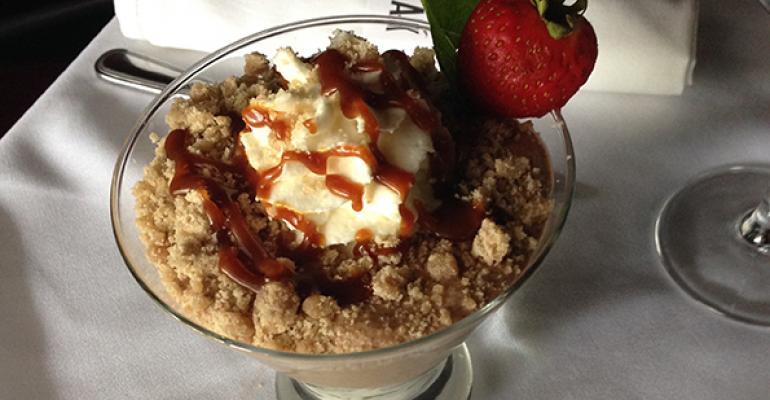 When it comes to fall desserts, pumpkin isn’t just for pie anymore. In the last few years, more varied desserts featuring the big orange squash have been sprouting up on more menus.

Recent research from Datassential MenuTrends shows that pumpkin has steadily grown as a dessert menu flavor since 2005, increasing 11 percent in the last year alone. While one third of all pumpkin on dessert menus appears in pies, pumpkin is growing in all of the top item types where pumpkin is menued, including in cheesecake, cakes, frozen treats and ice cream, custards and flans, and dessert bars. Datassential analysts attribute the increased use of pumpkin in desserts to the trend in seasonal eating, while chefs say they enjoy pumpkin’s versatility.

“Pumpkin has such a neutral flavor; it picks up any other flavor you put into it,” said Phil Hambelton, chef of George Martin's Strip Steak in Great River, N.Y. “The possibilities with pumpkin are endless.”

Hambelton strives to create dishes that make diners bite into them and say, “This is different.” Last year he made a pumpkin mousse with a cinnamon piecrust crumble and a pumpkin-flavored liquid nitrogen ice cream. While he plans to return those two popular items to the menu this fall, he’s also working on a pumpkin baklava, a twist on the classic Turkish pastry, filled with pumpkin puree.

Bronwen Wyatt, pastry chef at La Petite Grocery in New Orleans, takes fresh pumpkin, bakes it until tender, purees it and then reduces it with sugar and spices until its deeply caramelized. She then either adds cream and eggs to this filling and bakes it in a tart, or uses it straight by wrapping it in puff pastry and making it into a little turnover, served warm with ice cream and usually a streusel of some kind. While Wyatt likes traditional pumpkin preparations, she’s also considering more offbeat desserts, such as a pumpkin soufflé.

“I love pumpkin desserts because I'm from farther north, so we used to go to the pumpkin patch every year as children and pick our own pumpkins,” said Wyatt. “My mom would make us toasted pumpkin seeds and bake the quintessential pumpkin pie every year at Thanksgiving and Christmas. I loved it too much to seclude it to a single holiday.”

Many chains have also been inspired to innovate around pumpkin.

Also, debuting this fall is a new line of “naughty” and “nice” pumpkin smoothie LTOs from Atlanta-based Tropical Smoothie Café. Among the options is an indulgent smoothie made with pumpkin, cinnamon and Ghirardelli white chocolate, and a better-for-you smoothie featuring a blend of pumpkin, peaches, goji, cinnamon and low-fat yogurt.

And, after successful testing at select restaurants, Burnsville, Minn.-based bd’s Mongolian Grill will debut a new pumpkin cheesecake in October.

“Our guests are looking for fresh, seasonal foods,” said Joe Phraner, bd’s Mongolian Grill president and chief operating officer.  “We try to accommodate them in each piece of our business, whether it is fall vegetables on our market area, seasonal sauces or, in this case, a terrific cheesecake.”