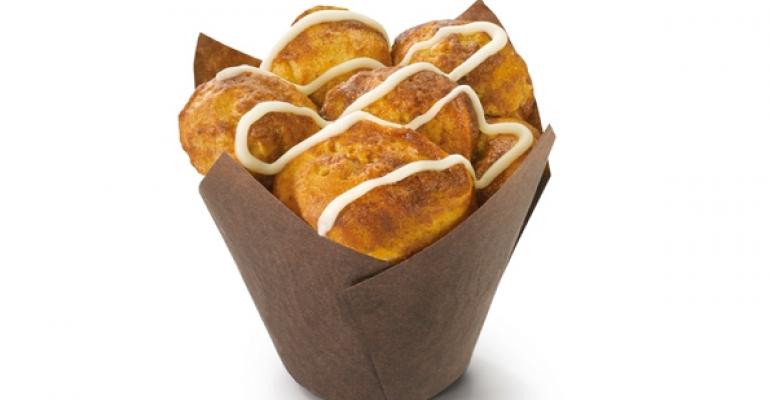 Pumpkin-flavored cookies, ice cream, and more pop up at restaurants

Many dessert items have proclivity for one season or another: Chefs pair strawberry and rhubarb for spring desserts, peaches appear in the summer, and we see a few more chocolate desserts in the winter than the rest of the year. But autumn is virtually the only time for pumpkin.

This year, Einstein Bros. Bagels and Noah’s New York Bagels have added a Pumpkin White Chocolate Chip Cookie, as well as Pumpkin Bagel Clusters, at their more than 800 units. Pumpkin Bagel Clusters are a pull-apart treat tossed in pumpkin syrup and cinnamon sugar streusel, drizzled with cream cheese icing. The bagel clusters are priced on average at $1.95.

Atlanta-based Great American Cookies, which has 325 locations, has introduced a Pumpkin Spice Cookie for the season, studded with bits of pumpkin and white chocolate chips and sprinkled with cinnamon sugar. The cookie, first introduced in October 2011, is available through October.

Stevi B’s Pizza, a 48-unit chain based in Atlanta, has also reprised a seasonal dessert. Pumpkin Pie Pizza, topped with warm pumpkin pie filling, a sweet crumb topping and icing, is available through the fall as part of its buffet line, which ranges in price from $5.99 to $6.99, depending on the location.

Frozen treat chains are also looking to lure customers with pumpkin-flavored items, even as temperatures dip. Baskin-Robbins, for example, is bringing back Pumpkin Pie Ice Cream for October at its 2,456 domestic locations.

Rita’s Italian Ice introduced a Pumpkin Cheesecake Cream Ice as a limited-time offer in September, which blended two existing flavors: pumpkin pie and cheesecake. Although the 600-unit chain didn’t report sales figures for the offer, a spokeswoman said it was selling “really well.”

Pumpkin Pie is also the Blizzard flavor of the month at 6,300-unit Dairy Queen.

Independent restaurants also are celebrating the fall with pumpkin treats. Christine Paciello, pastry chef of Jones, a Stephen Starr restaurant in Philadelphia, has introduced an array of pumpkin desserts for the season, including an individual-sized pumpkin cheesecake with a gingersnap cookie crust.

Paciello makes her own gingersnaps, grinds them, and adds sugar and butter to make a crust. She fills the crust with pumpkin purée seasoned with cinnamon, nutmeg, clove and ginger, mixed with eggs, vanilla, sugar and some flour, to absorb the purée’s moisture and help the cake set. She tops the cake with whipped cream, candied walnuts and caramel bourbon sauce.

“Pumpkin definitely has gotten more popular over the years,” Paciello said. “I think it’s just a welcome change from spring and summer.”

For a pumpkin ginger crème caramel, Paciello cooks sugar until it caramelizes and pours it in the bottom of a ramekin. She steeps fresh ginger in cream and adds eggs and pumpkin purée spiced with cinnamon, cloves, ginger and nutmeg. She pours the mixture into the caramel-lined ramekins, bakes them, and lets them cool and set overnight

Lucero Martinez, the chef at Pampano in New York City, makes an upscale version of calabaza en tacha, a traditional Mexican dessert typically eaten on Nov. 1, the Day of the Dead holiday.

“It’s one of my favorites because it’s such an easy and traditional dessert,” she said.

She starts by making a syrup of Mexican brown sugar, called piloncillo, cooked in water and seasoned with orange zest and star anise. Next, she simmers chunks of pumpkin in the syrup for about an hour and 45 minutes, then strains them, puts the pumpkin pieces on a tray, drizzles them with the syrup, and caramelizes them in a broiler. She serves the dessert with crème fraîche gelato topped with a streusel of toasted pumpkin seeds, flour and sugar. The item is part of a $50, five-course tasting menu.