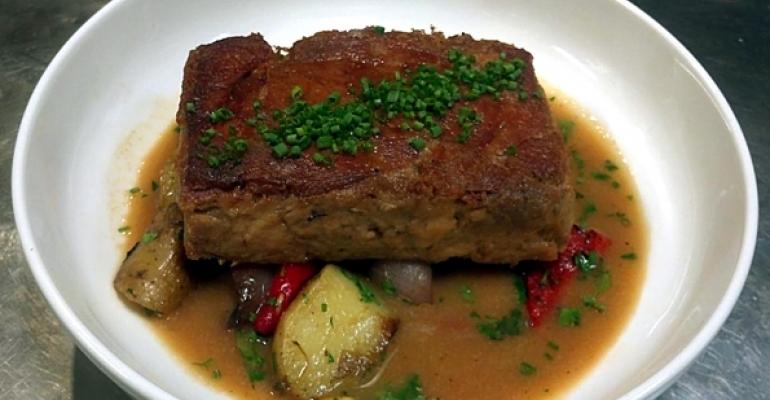 Almond milk, duck and Lao cuisine are among foods gaining traction this season.

Autumn is approaching, with restaurants putting apples and cider, squash, game meat, and more pumpkin than you can shake a cinnamon stick at on their menus.

But other trends are emerging that are likely to gain traction in the coming months, as restaurateurs respond to consumer demands for variety, robust flavors and healthful items.

Below are a few of the foods that you can expect to see more of on menus this fall.

This dairy alternative is a popular part of many juice cleanses, and it’s also trending in supermarkets, where almond milk sales by volume grew by 57.5 percent between 2011 and 2012, according to the Almond Board of California.

Almond milk is made by soaking almonds in water, puréeing them, straining them and sometimes flavoring the liquid with vanilla, sweeteners or a little salt. Independent restaurants have been using this vegan, low-calorie, gluten-free and antioxidant-rich liquid to add nuttiness and creaminess to dishes.

Dave Santos, chef of Louro in New York City, adds milk made from toasted almonds to a pork belly dish with piquillo peppers, charred onion and new potatoes, priced at $29.

At Departure in Portland, Ore., Gregory Gourdet makes almond-milk ice cream to serve with a strawberry and Asian pear crisp, which keeps the dish vegan and dairy-free. The dessert is priced at $9.

In recent months, chain restaurants have also started to use almond milk. Todd English’s five-unit Olives adds it to breakfast oatmeal, priced at $9.

Robeks, a 110-unit smoothie concept based in Los Angeles, offered three Almond Milk & Date Smoothies this summer in strawberry, blueberry and peach flavors, priced at around $6.50 for a medium smoothie.

Thai and Vietnamese cuisine are well established in the American food landscape, but adventuresome diners are looking to expand their horizons when it comes to Southeast Asian food. The latest dishes to get their attention come from an area sandwiched between Thailand and Vietnam.

The Lao people live in the mountainous, landlocked country of Laos, and also on the Khorat Plateau of Northeastern Thailand. Menus that include “Northeastern Thai,” or Isaan, Esarn or Esaan — alternate spellings for the Thai word for “northeast” — dishes offer food from this region.

Laos and Isaan are poor areas, and their food tends to be more rustic than the subtle, elegant dishes of Vietnam or the rich curries of central Thailand. Grilled strips of meat with sour-spicy dipping sauces are the order of the day, along with marinated grilled chicken and sticky rice. Som tam, the popular green papaya salad, also is attributed to the Lao.

In the United States, Lao food has found a bicoastal champion in Andy Ricker, chef-owner of the Pok Pok restaurants in Portland, Ore., and New York City. The restaurants’ name comes from the sound made by the mortar and pestle used to make som tam.

Lao food has long been available in Los Angeles, but earlier this year it made a move out of Thai Town when Isaan Station opened in nearby Koreatown.

In New York City, Khe-Yo opened this summer, offering Lao-inspired food by Laos native Soulayphet Schwader. Celebrity chef Marc Forgione is a partner in the restaurant, which was designed by Michelle Biancardo of the Rockwell Group. The food centers around sticky rice and includes high-end versions of Lao food, such as a naturally-raised half-chicken with sweet chile honey and Kirby cucumber, priced at  $22, and an appetizer of bamboo-grilled ginger quail, priced at $13.

In late August, Somtum Der also opened a second restaurant in New York; the first location opened in Bangkok in 2012. A variety of different som tams are on offer, ranging in price from $8 to $13, along with a sort of pork jerky called moo dad diew, priced at $7, and an herb-rich Lao chicken soup called kaeng om kai, priced at $11.

High-end Lao food also is available in Washington, D.C., at Little Serow, where chef Johnny Monis serves $45 tasting menus including dishes such as som tam with corn and a Lao fermented fish called pla ra, as well as Northern Thai dishes such as naem, a sour pork sausage that Monis makes with deep-fried rice and peanuts.

Duck, a game meat, appears on menus more in the fall than other times of the year, but it also enjoyed robust growth in the first half of the year, according to GuestMetrics, which monitors point-of-sale data at full-service restaurants.

When chicken wing prices skyrocketed around the time of the Super Bowl this year, some restaurants turned to duck wings as alternatives. Chef Greg Boschetti of Temple Bar in Cambridge, Mass., served confit duck wings, which he deep-fried to order and served with a sweetened soy-sauce reduction, priced at $11 for an order of 10 to 12 wings.

Mark Liberman, chef of AQ restaurant in San Francisco, said he plans to offer rotisserie duck on the menu at TBD, a restaurant scheduled to open in October that prepares all of its food in wood-burning hearths.

Liberman, who was raised in the San Francisco Bay area, said he grew up on rotisserie duck, so it’s a nostalgic item for him. He also said that whenever he puts duck on a menu it’s a top seller.

Duck has even made it into a shepherd’s pie at Avant at the Rancho Bernardo Inn in San Diego, where chef Nicolas Bour adds shredded duck confit to a duck-stock-based sauce and tops it with whipped potatoes. The dish is priced at $28.

Other types of squash

McDonald’s said it would introduce a pumpkin spice latte this fall, meaning that the drink, which Starbucks popularized as a seasonal offering, is now everywhere. Pumpkin doughnuts, cupcakes, pancakes and pies have proliferated in the fall for the past several years. Now chefs are looking for something new that’s autumnal, appropriate for dessert, and made with other types of squash.

The Refinery in Tampa, Fla., will offer a butternut squash semifreddo with salted orange caramel. The dish, priced at $7, has a little bit of pumpkin in the form of candied pumpkin seeds, which the restaurant refers to by its Spanish name, pepitas. Butternut squash crumble is on the menu at Library Bistro and Bookstore Bar in Seattle, priced at $8.

At Oceana in New York City, a dessert called Mont Blanc, because it resembles a snow-capped mountain, is made with puréed chestnuts and blue Hubbard squash topped with whipped cream and served with smoked vanilla ice cream. The dessert is priced at $12.