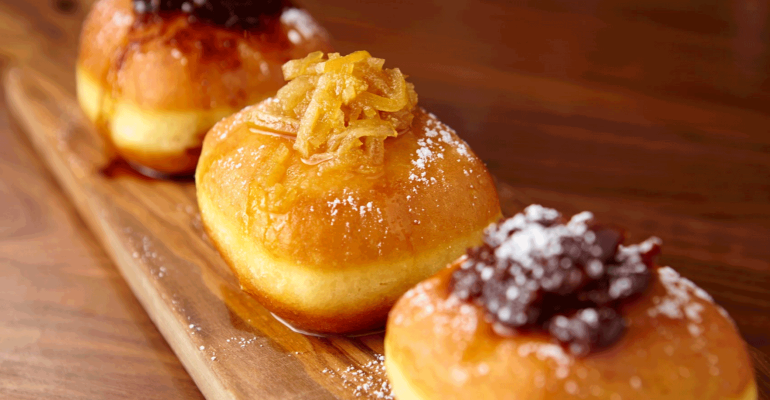 People have been frying up dough as a sweet treat for, well, almost as long as there have been people.

Nearly every culture has a version, from Greek loukoumades and French beignets to Native American fry bread and American funnel cake. While today this simple, indulgent treat is most often associated with festivals, fairs or carnivals, fried dough has of late secured a spot — and a following — on many restaurant menus.

At Ousia, a Greek and Mediterranean restaurant in New York City, one might expect to find on the dessert menu loukoumades, Greek donuts soaked in honey syrup and dusted with cinnamon and walnuts.

Instead, chef Vasiliki Vourliotaki is serving Donut Pikilia, a square-shaped hybrid of an American yeast doughnut and traditional Greek ingredients for the fillings and glazes. Recent flavors have included mastica — a spice exclusively grown in Chios, Greece — with pistachio and a mastica chocolate mousse and candied pecans.

“Our doughnuts are different because of the diverse fillings and toppings we use that are a Greek-American fusion,” said general manager Johnny Livanos. “We love meshing Greek flavor and ingredients with more common styles of food.”

And Ousia’s customers love to eat them: Donut Pikilias is one of the most popular dishes on the dessert menu. Red Star Tavern’s warm Cinnamon Sugar Donuts are served with a side of butterscotch pudding and apple butter.

Also taking inspiration from a classic is pastry chef Stacey Needham of Red Star Tavern in Portland, Ore. Needham recently added to her fall menu Cinnamon Sugar Donuts, inspired by the Pennsylvania Dutch community where her grandmother lives. Needham’s version features doughnuts fried to a sweet-spiced crust, served warm with a teacup of butterscotch pudding and a layer of apple butter.

“The dessert all stemmed from apple butter. It is something that my grandma and I made together when I was little, and I knew I wanted to make it a part of a fall dessert,” Needham said. “The doughnut was actually the last, but equally essential component. I wanted a cinnamon-sugar, pillow-y doughnut as the vessel for the other two flavors.”

Barton G, which has locations in Los Angeles and Miami, is also serving a fried dough dessert with Pennsylvania Dutch roots. Carnival Fun Cakes features classic funnel cake, which was brought to America by German immigrants who settled in Pennsylvania in the late 17th and early 18th centuries, served with dipping sauces such as chocolate, strawberry-lemon and salted caramel, fresh whipped cream and topped with powdered sugar.

Building on funnel cake’s later history as carnival fare, the Carnival Fun Cakes are served in a game box that lets customers take turns shooting a rotating line of ducks with a toy gun while they eat. “It’s all about the experience, bringing out the kid in all of us and celebrating those great childhood memories. Summer carnivals, Fourth of July street fairs. Great smells, even better tastes,” said founder and owner Barton G. Weiss. “Why not celebrate the summer all year long?”

The dessert menu at Graffiato, chef Mike Isabella's Italian-inspired restaurant in Washington, D.C., features what else but zeppole, the deep-fried Italian dough balls, tossed in powered sugar and served with a side of Bavarian cream.

“Zeppole are a New Jersey pizzeria staple traditionally made with leftover dough scraps, fried and coated with a lot of powdered sugar and sometimes cinnamon,” said Terry Natas, chef de cuisine of Graffiato. “Here at Graffiato, we do not use pizza dough scraps, but rather make a specific dough that fries up nice and fluffy, topped powdered sugar. We put another twist on the dessert with Bavarian cream and fresh fruit on the side.”

The fluffy fried dough is consistently a best-selling dish. Round Petit Beignets with dipping sauces are on the menu at Moderne Barn in Armonk, NY.

“Traditional Petit Beignet are larger, triangle shaped fried dough. At Moderne Barn, we make them into round, bite-sized pieces with three different dipping sauces so they can be better shared,” Kostbar said. “I thought this dessert was the perfect addition to our menu that would appeal to all diners.”