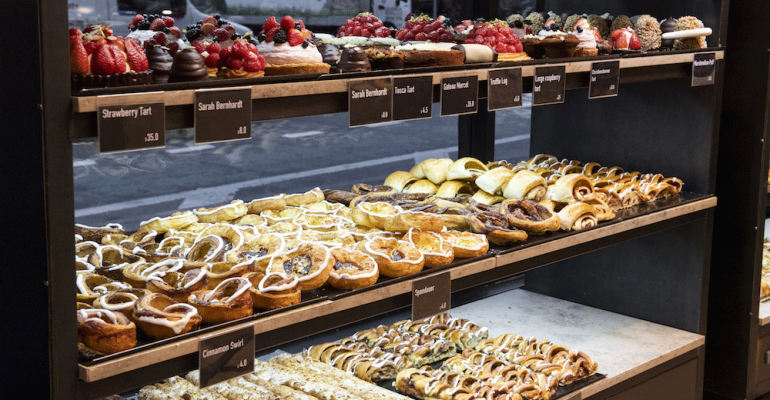 For every action there’s a reaction, and so with the gluten-free movement comes Ole & Steen.

This grain-focused bakery chain based in Copenhagen, Denmark, opened its 100th unit, and its first in the United States, in New York City last month.

Originally called Lagkagehuset, or “layer cake house,” founders Ole Kristoffersen and Steen Skallebaek realized that name wouldn’t exactly roll off the tongue of English speakers, so when they opened in London they named it after themselves instead.

Ole & Steen offers a wide variety of pastries, as well as soups and porridges, many containing wheat berries or rye kernels to build on the concept’s grain theme.

At the core of the bread is it sourdough starter, which United States operations director Gabriel Sorgi said is 150 years old.

“The sourdough is what gives the bread its taste,” he said.

As it ferments the dough, it gives it a sweet-sour taste and caramel color. The slow process by which the dough develops keeps it soft and allows it to hold a lot of moisture, “giving us a nice crumb,” he said.

The bakery’s dark, intense rye bread forms the base for open-faced sandwiches topped with smoked salmon, roast chicken and a vegetarian option of potato, kale, pickled onions and mayonnaise. Other sandwiches are served on ciabatta and focaccia.

Coffee, tea and hot chocolate are available, too, as is wine and Mikkeller, a Danish craft beer.

The first U.S. Ole & Steen location is near Union Square in New York City, and a second one is slated to open in Midtown Manhattan in March, followed by a third one in a different part of Midtown this summer.