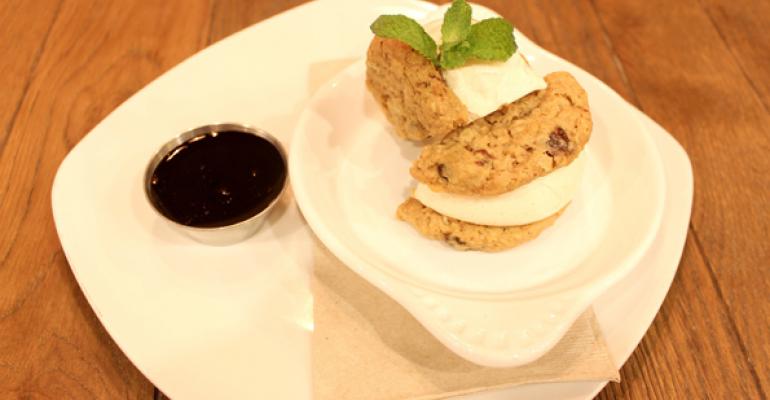 Always looking for the next great way to end a restaurant meal, some chefs have recently been introducing innovative mashups of two popular dessert trends: retro-inspired frozen treats and craft ice cream.

Retro desserts, such as sundaes, banana splits and ice cream sandwiches, are a recent trend that continues to grow rapidly, and craft ice creams — small-batch ice creams made with natural, high quality ingredients — are poised to take off in the coming year, according to menu research firm Datassential.

“[It’s a] nostalgic American thing,” said Obolsky. “It makes you think of going to the movies. It’s just different.”

To make the popcorn ice cream, she soaks popped corn overnight in butter, kosher salt and milk. Then she purées that mixture and adds it to a traditional ice cream base.

Strange as it may seem, popcorn is in fact appearing more often on dessert menus. According to Datassential, popcorn as a dessert has grown 200 percent on dessert menus since 2009. And at least one other chef has transformed puffed maize into a frozen treat.

Pastry chef Jason Gehring of the Bistro Bar at Menu in Washington, D.C., also riffs on the popcorn-at-the-movies theme with a popcorn sundae. His is made with popcorn ice cream, cola sorbet and nougat ice cream topped with chocolate cookie crumbs coated in chocolate.

He makes the ice cream by steeping popcorn in the milk that he uses to make it into ice cream.

“[I wanted to] have a plated dessert that mimics what I get at a movie theater — popcorn, a Coke and a candy bar,” said Gehring. “It sells really well.”

Gehrig has also had success creating desserts with ice creams that mimic other classic foods, including a Belgian waffle with brown butter gelato and maple syrup.

While many chefs are experimenting with sundaes, ice cream sandwiches remain a popular platform as well.

“The ice cream sandwich shows off the more casual side of Gramercy Tavern. It celebrates something that might seem simple, but that is a classic American sweet treat,” said Uskokovic, who grew up in Serbia. “I always like the concept of an ice cream sandwich and wanted to create a unique version that is interesting in flavor.”