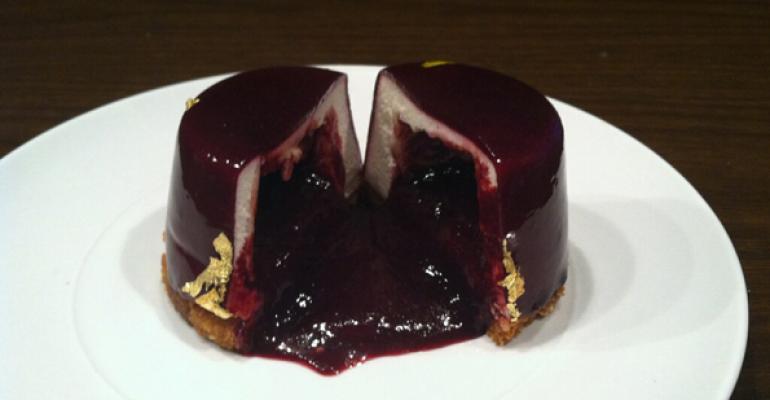 With much of the country experiencing the harshest winter in recent memory, it may seem a bit premature for berry desserts to show up on restaurant menus. Yet, chefs across the country are featuring them, and diners are eating them up.

Showing up in full force are blueberries, which exhibited the strongest four-year growth among berries on dessert menus, according to current menu research from Datassential.

Blueberry cakes and tarts, often paired with a touch of lemon, seem to be the item of choice for berry-loving chefs this season.

Brian Evans, executive chef at The Tasting Room in Houston, is dishing out a blueberry chiffon cake with lemon-buttermilk Bavarian cream. It’s an airy yellow sponge cake with blueberry puree cut into little circles and then layered with whole blueberries and cream for $8.

“I like to use blueberries this time of year,” said Evans. “It’s almost like a breath of spring.”

Evans says the cake is among the restaurant’s best-selling desserts, in part because diners see it as a light way to end their meal.

At Isabella’s in New York City, chef Chris Giarraputo is serving a lemon blueberry tart for $8. Developed especially for Restaurant Week and with an eye toward spring, the tart is made of a butter crust shell with lemon filling and topped with fresh blueberries and raspberries.  It’s been so popular Giarraputo said he will likely add it to the regular menu.

Recently appointed executive pastry chef at Chefs Club by Food & Wine at the St. Regis Aspen Resort in Aspen, Colo., Sylvain Marrari offers a blueberry cake that’s a spring-like spin on the classic molten chocolate cake for $10. But instead of melted chocolate, this cake oozes blueberry.

Not quite ready to menu blueberries just yet, Joseph Gabriel, executive pastry chef at Oceana in New York City, finds a delicious alternative in huckleberries, the small red or purplish berries with a taste similar to that of a wild blueberry. He’s been serving them in his huckleberry Greek yogurt parfait since early fall.

“Normally, I don’t put berries on the menu in wintertime, but there’s always a demand for berries,” said Gabriel. “If you’re going to use a berry in wintertime, huckleberry is the one to use.”

Others chefs have been busy developing fresh blueberry desserts they plan to serve in just a few weeks when the berries arrive in season in their area.

Jemil Gadea, pastry chef at NoPa Kitchen and Bar in Washington, D.C., is whipping up a blueberry crumb cake to go on the menu around late April. It’s a classic coffee cake with hints of lemon and pink pepper and dotted with blueberries accompanied by a house-made double Devon cream, blueberry compote and a scoop of lemon-verbena-blueberry sorbet.

Cindy Schuman, pastry chef at Sepia in Chicago, plans to bring back her popular blueberry tart just as soon as the first fresh, local blues become available again. It’s a simple piecrust with blueberries baked into it, then topped with fresh blueberries and vanilla crumble, served with buttermilk ice cream and a lemon ginger sauce.

“I just wanted to make a dessert that kept the fruit in the most fresh state, straight from picking,” said Schuman. “You can always make a compote or coulis with the berries, but this [shows] them off at their best.”