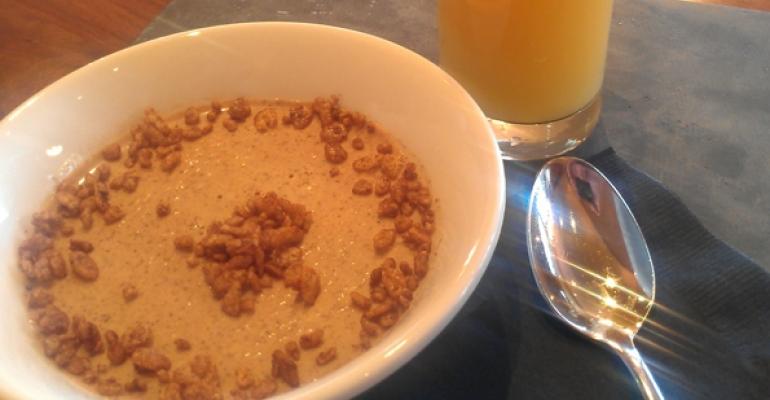 Breakfast and dessert are two low-stress dayparts intended, respectively, to ease people into the day and then to finish the day off with something sweet. Pastry chefs are drawing inspiration from one of these bookends to the day’s eating and applying it to the other as they bring the flavors, shapes, and sometimes the foods themselves associated with breakfast to dessert.

Breakfast items for dessert are not new: Many items now considered breakfast items, including pancakes and waffles, have been common dessert items in the past, and doughnuts have enjoyed a resurgence on dessert menus over the past decade. But many of the latest round of breakfast-for-dessert items are done with more self-awareness, whimsy or both.

Sous chef Ryan Fox at Three Degrees in Portland, Ore., said that if desserts aren’t going to be serious and innovative, they should be playful. That’s the route he took with his guests, who he said appreciate desserts that are simple and fun, such as his cereal milk panna cotta. Drawing inspiration from the leftover milk in a cereal bowl — which first became a sensation in 2008 when it was introduced at Momofuku Milk Bar in New York City — Fox has used both Cap’n Crunch and Cocoa Krispies to make the dessert, which he serves with a glass of orange juice, lest someone miss the joke, for $7.

Also done with self awareness and whimsy is the breakfast ice cream made by Erin Swanson, pastry chef of R’evolution in New Orleans. To make the dessert, cinnamon rolls are torn into pieces and infused into half-and-half to make a crème Anglaise that’s then spun into ice cream. When the ice cream reaches soft-serve consistency, candied bacon bits are folded in. The ice cream is served over crumbled biscuit that has been tossed with butter, sugar and orange zest and then toasted until crisp. It’s garnished with candied bacon.

Pop Tarts are another iconic breakfast item that have made it to the dessert menu. Sister chains Carl’s Jr. and Hardee’s rolled out Pop Tart ice cream sandwiches nationwide last summer, and Foreign Cinema in San Francisco has been offering house-made seasonal and organic versions of the Kellogg’s treats since 2001, in flavors such as Cara orange and apple cinnamon, for $6.75.

Lauren Kroesser, pastry chef of Eastern Standard in Boston, has taken a more traditional approach with the Belgian waffle on her dessert menu. The waffle itself — crisp on the outside and moist on the inside, is flavored with vanilla bean, dark rum, and lemon and orange zest and is topping it with salted butter ice cream, toffee crumble and black current syrup. The dish is $8.

Similar items are on the dessert menu at B Too in Washington, D.C., where chef Bart Vandaele, a native of Belgium, makes an almond-flavored frangipane waffle with banana and beer caramel, which he serves for $9.50. He also serves a pistachio waffle with cranberries, accompanied by chocolate-honey ice cream and cranberry compote, for $9.

Correction: Feb. 11, 2014 This story has been updated to clarify which W hotel in Los Angeles serves the Oops! I Dropped My Ice Cream Cone dessert.