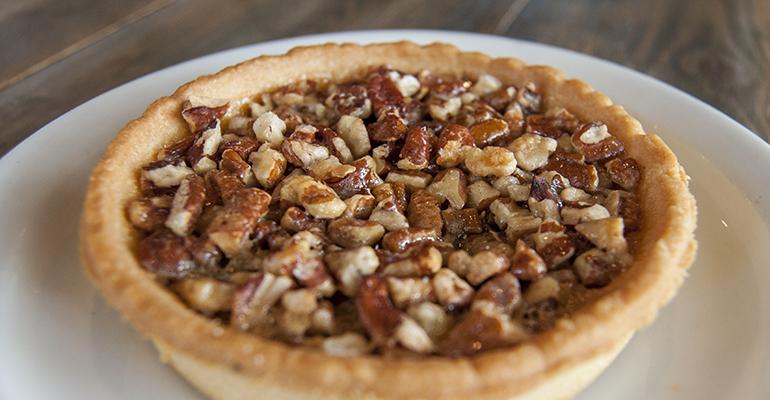 With classic Southern pies, ‘no need to gild the lily’

But with these trending pies, a touch of bourbon or chocolate can’t hurt

Key Lime Pie and Pecan Pie are two very different desserts — one refreshingly light and tart, the other sticky sweet and nutty. But these divergent desserts also have two things in common: both originated in the South and both are proliferating on menus this summer.

“Key Lime Pie is the perfect ending to a true Southern meal, especially one featuring fried chicken,” said Janine Booth, chef and owner of Root and Bone in New York City. “The refreshing tartness of the pie helps balance the heaviness of the meal.”

At Root and Bone, a farm-to-table Southern restaurant, Booth added key lime pie to the menu to pay tribute to her partner Chef Jeff McInnis’ Florida roots and their “collective past Miami history.” The pie is classic, made with key lime juice, condensed milk and egg yolks with a lightly torched meringue topping and homemade graham cookie crust.

“The classic is perfect, no need to gild the lily,” said Booth.

Wilits, who grew up spending time and eating key lime in the Florida Keys each year, puts a twist on the classic pie using French brown butter, sea-buckthorn (a sour and tart orange-colored berry) instead of key lime, and fleur del sel in the crust and the whipped cream used as garnish.

“It's super simple, we just twisted the classic up a little with some really nice ingredients,” said Wilits. “It's great to be able to take something super classic and transform it into something even more tasty and beautiful.” The twisted Key Lime Pie made with French brown butter, fleur de sel and sea-buckthorn at Camperdown Elm in Brooklyn.

To balance out the generous portions on its main menu, The Grill on the Alley, an American steakhouse in Beverly Hills, Calif., offers a traditional preparation of key lime pie made with fresh lime juice, egg yolks and beaten condensed milk in a buttery graham cracker crust, topped with fresh whipped cream, dusted with lime zest and served with a raspberry sauce.

“Because most of the dishes at The Grill on the Alley come in such generous portions, our customers love having a dessert that is so light and sweet, that doesn’t weigh you down further, and has that palate-cleansing citrus bite at the end,” said John Sola, CEO of Grill Concepts, The Grill on the Alley’s parent company.

Meanwhile, chefs are giving rich and boozy upgrades to that other Southern staple:  pecan pie.

For example, Sweet Auburn Barbecue in Atlanta makes its pecan pie with touch of bourbon to complement a plate of its house-smoked pulled pork and other dishes.

“Pecans and pie have been paired in the South for years, but we decided to take it a step further and add a hint of bourbon for sweetness,” said Sweet Auburn Barbecue's executive chef Cameron Floyd.

Among the restaurant’s bestselling desserts, the sweet pie is made with freshly chopped pecans and bourbon and served with a scoop of High Road brown butter praline ice cream, whipped cream, strawberries and salted caramel.

Also adding bourbon to it pecan pie is The Union Kitchen, a “global cuisine with Southern hospitality” concept with four locations in the Houston, Texas area.

“The pie has the meaty, sweet bite of the pecans and the dark hints of whiskey from the Red River Texas Bourbon Whiskey,” said Paul Miller, CEO of Gr8 Plate Hospitality, The Union Kitchen’s parent company. “It's a satisfying dessert for a wide range of palettes.”

The pie, which was added to the menu in Fall 2016, is so satisfying that after it was removed from the menu in the Spring 2017 to make room for more seasonal desserts guests kept asking for it and so it was promptly brought back.