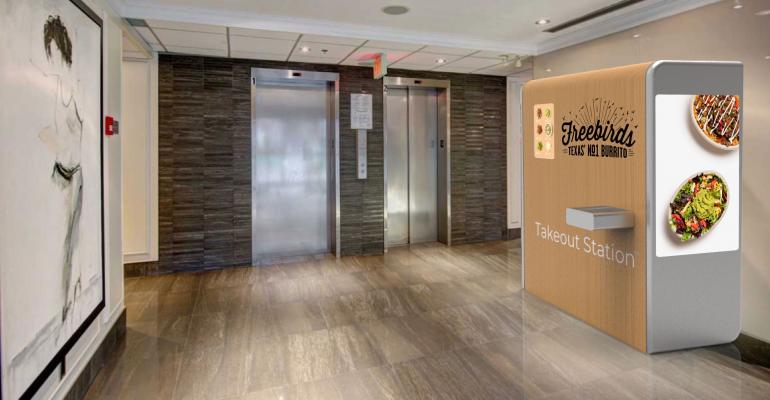 Now Cuisine
This rendering offers a view of how Freebirds would look in a Now Cuisine's kiosk.
Operations>Delivery & Takeout Solutions

Related: Freebirds World Burrito wants to be the largest burrito chain in Texas

The branded Takeout Stations are about three feet deep, six feet wide and seven feet tall, and they have a capacity of between 130 and 150 meals per stocking, a spokesperson said.

“Restaurant-branded Takeout Stations will likely be placed in multifamily and office buildings, with plans to later expand to college campuses, airports, hotels, and other locations,” the companies said in a statement about the new artificial-intelligence-based robotic kiosks.

The companies have not yet announced a timetable for rollout.

“We’re continuing to invest in new technologies that give people the option to have Freebirds’ craveable bowls whenever and wherever they want them,” said Alex Eagle, Freebirds CEO. “It’s just cool that a Texas-based A.I. and robotics company can help a Texas-based burrito company expand in ways we could only imagine just a few years ago.”

Other companies have been forging new positions in the robotics space. Bear Robotics in late 2020 announced plans to rebrand and scale the food-running robot as Servi and roll out to domestic restaurants. And in August, Los Angeles-based Sweetgreen agreed to acquire the Boston-based lunch bowls brand Spyce.

Now Cuisine’s Takeout Stations are automated and can be placed nearly anywhere to serve made-to-order hot meals in minutes any time of day. Freebirds has issued a purchase order to Now Cuisine which will allow its food to be served in multiple Takeout Stations in Texas as part of the pilot.

As part of the partnership, Eagle is joining Now Cuisine’s advisory board, where he will provide strategic guidance on marketing Now Cuisine and expanding operations throughout Texas.

Freebirds recently announced a partnership the Qu unified omnichannel ordering platform to integrate a range of systems and give guests ordering and pick-up options. Freebirds said Qu’s cloud-based design will let it experiment with additional mobile and non-traditional outlets.

Freebirds has said its main areas of expansion will be in the Texas cities of Austin, Dallas, Houston and San Antonio.