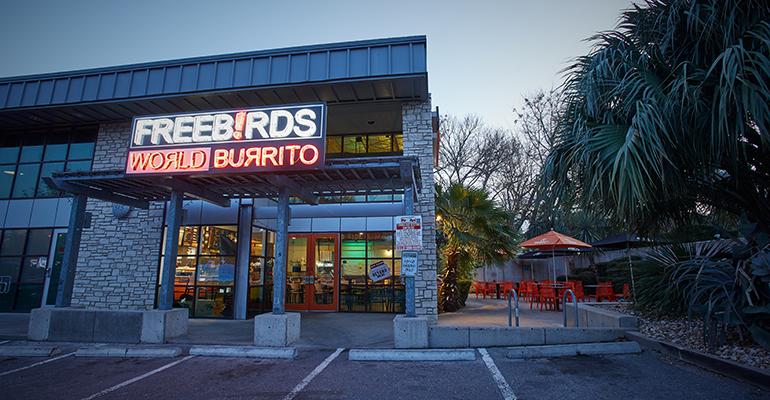 Texas-based restaurant chain Freebirds World Burrito is homing in on its Texas roots, planning to double in size in its home state over the next five years.

With 55 units across Houston, San Antonio, Austin and Dallas, Freebirds has the state covered, but the brand is looking to reach 100 Texas units very soon.

“We're very ambitious about growing and our position to grow, especially the opportunity that we have to grow within our home state of Texas,” said CEO Alex Eagle.

This burrito chain — with protein including brisket, steak, chicken and vegetarian options available in burritos or bowls with prices between $7 and $12 on average for an entrée — calls itself “Texas’ No. 1 Burrito.” So, they’re putting their money where their mouth is.

What’s the chain’s goal? To become the biggest burrito restaurant in the Lone Star State.

That will be a big feat since fast-casual competitor Chipotle has 260 locations in the state, according to the company’s website. But Eagle and his team are nothing if not determined.

“[Doubling in size] could be much faster than [5 years]” said Eagle.

To further growth strategy, the brand hired a new chief technology officer in February this year, Dawn Gillis, who had most recently served as CTO at Austin-based Torchy’s Tacos. Gillis was immediately tasked with going through the entire tech stack at Freebirds to systematically upgrade everything, according to Eagle.

“[Freebirds is] positioning the brand for the future with technology,” said Eagle.

Some of that technology is focused on off-premises, such as a new mobile pickup location and other non-traditional units.

“We will be looking at different styles of growth than we've looked at in the past,” said Eagle.

In addition to the soon-to-be-announced mobile pickup location, Freebirds has expended into college campus dining with a new location on the campus of the University of Texas at San Antonio.

“I see Freebirds having a lot of potential to grow in non-traditional ways, because our appeal, the appeal of our brand and our product is so broad that the closer we can get our product to our end user, the better,” said Eagle. “That means we need to get more creative than ever.”

Freebirds is 100% company-owned and not yet focused on expanding through franchising, with Eagle saying that they’d prefer to get the model right before opening it up to franchisees.

Right now, the focus is on the customer experience for Freebirds as the brand begins its massive expansion plan. Some of those things include a support center for both employees and customers, app enhancements and additional team member training.

“I know that our potential is much greater than [doubling in 5 years], but we are going to protect that experience and not grow beyond what we can support with Freebirds’ leadership team,” said Eagle.