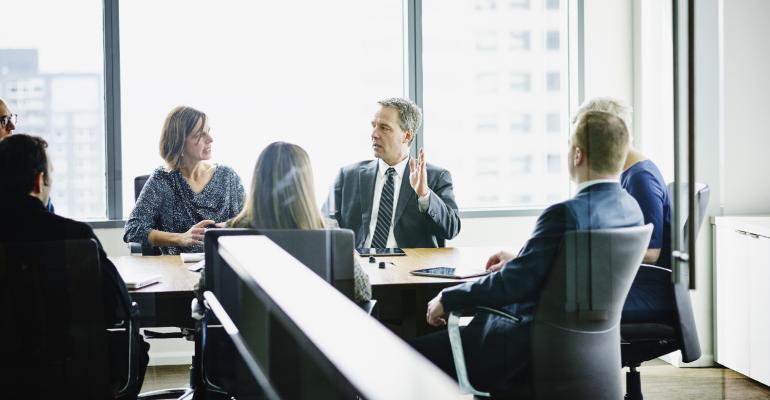 Thomas Barwick / Stone / Getty Images
The Diversity 2.0 challenge is to recognize that some of our actions over time have resulted in driving some of the folks who are most needed in the conversation away from the idea generation and refinement table.
Create the Future of Foodservice

Lessons in Diversity, Inclusion & Bias (DIBs): Who is missing from the conversation?

This demographic needs to have a seat at the table when driving the conversation around diversity and inclusion.

We had a great discussion at CREATE: The Future of Foodservice in Denver, and I am thankful to the organizers, planners and other professionals that made it easy for me and the other panelists to do our jobs. Our conversation spanned three topics, and each one was a gritty topic deserving of a bit more unpacking.

One is the challenge of, “Who is missing?”

Related: Why it’s important to get uncomfortable around diversity and equity conversations

In the work of diversity (broadly speaking), we often speak to what the gaps are. We talk about who is not represented at the table. We work hard to make plain that there are critical voices with equally critical opinions that need to be heard. In fact, the business case is driven and undergirded by more diverse voices around the decision-making table resulting in the most profitable companies. We have acronyms like BIPOC (Black, Indigenous, People of Color) or LGBTQ (Lesbian, Gay, Bisexual, Transexual, Queer) or API (Asian Pacific Islander) and others that are all designed to engage people in conversation and highlight groups who deserve the spotlight.

Let’s now connect this to conversations that have happened over the past several years that utilize the term “middle aged white man” in such a way that it has become in many ways a micro-aggression. A way of slighting or cutting this group of folks, leaving them feeling less than welcome and less than invited to the table where diversity work is being executed. Perhaps you have been there when it has happened? Whether from the stage or panel discussion, a committee room or a leadership listening tour, the phrase is used and in the voice inflection or the tone or the attitude it is made pretty clear this was a bit of an insult, a micro-aggression.

Combine this with the feelings of fear and trepidation many of our white male colleagues have around “saying the wrong thing.” They don’t want to cause (more) pain and neither do they want to experience discomfort themselves or be “cancelled” because they said something wrong.

Let’s be clear that the decision makers across the food industry are more often white and male. The next set of likely leaders to take their place are more often white and male. Their race nor their gender identity nor the combination of the two make them terrible people. Nor are they automatically resistant to wanting to fully embrace the organization’s diversity journey because of who they are or their position. In fact, the vast majority of people — including these guys — are good people who want to do the right thing as often as possible.

The Diversity 2.0 challenge is to recognize that some of our actions over time have resulted in driving some of the folks who are most needed in the conversation away from the idea generation and refinement table.

Put another way, white men are too often missing from the discussions, when in many cases they need to be leading them. This means that these leaders have a steep hill to climb in terms of comfort and confidence having these conversations. This is a difficult task, but not an impossible one. This means that ERG (Employee Resource Groups) have to be organized in such a way that leaders in the organization who may not be members of that identity group have membership and at times leadership responsibility beyond that of a cheerleader and ally.

People at the tops of organizations — who at this point are mostly white and male — must be deeply involved in any and every significant movement that occurs in an organization. They have been in the past, and the work of diversity should be treated the same way. Thus, they must be beyond conversant in the subject matter. In fact, they must be confident, comfortable and able to lead discussion in areas where they are not the expert in the subject, but they are experts in the organization and the industry. Simply put, they must lead.

If we want to win at the game of diversity, we need all of our best players on the field. We need players in every position engaging fully their minds to pull out the better solutions. In some cases, our best players happen to be white men in leadership positions. When they are absent, progress is limited. Look around the table, the stage, the virtual call when diversity is the subject. Are you in a “Who is missing” situation? If so, perhaps it’s time to do something about it.

James Pogue, PhD is a consultant in the areas of Diversity, Inclusion and Equity. He’s the founder of JP Enterprises and believes that sharing the results of his research with leaders and decision makers is his way to be a catalyst for positive change.