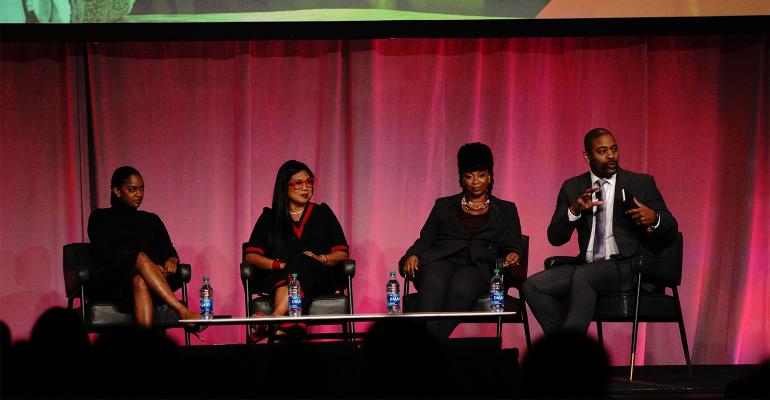 CREATE panelists led by sponsor Coca-Cola, Bloomin’ Brands and Chipotle discuss how to get real with diversity and inclusion efforts

Over the past year and a half, questions of diversity and inclusion have come to the forefront of companies’ goals and mission statements. But beyond promising specific numbers tied to executive salaries, how can foodservice companies make a meaningful impact on making sure everyone has a seat at the table?

Here’s what we learned from their discussion:

Don’t be afraid to include white men in the conversation

For everyone to have a seat at the table, you have to include the ethnic majority (traditionally, white men) in conversations around diversity and inclusion, otherwise change will not happen.

“These are the people who are largely making the decisions,” Marissa Andrada said. “And so you need them at the table. Think about any business challenge that we have. Does it exclude anybody? We need all smart people at the table.”

It’s okay to get uncomfortable

“[After George Floyd’s murder] I called all of the Black people on my team – about 25 people out of 150—and said ‘I don’t know how to help you but what’s going on,’” she said. “And I said, ‘Would you mind having the same conversation with everyone else in the room?’ and that’s what opened [my white colleagues’ minds] to say, ‘I had no idea this was your experience.’ It’s okay to be uncomfortable and it’s okay to not say the right thing.”

This fear of saying the wrong thing, or accidentally offending someone is often what holds white people back from participating in honest conversations about diversity, Cabral said.

“Men that are at that level [of executive leadership] said, ‘I do want to support you, do I have permission?’” she said. “Maybe we have to fold them in when there’s reluctance.”

Vulnerability is a communication asset

When white men are folded into conversations about diversity and challenges women and people of color face in the workplace, discomfort is normal because we are not used to that level of vulnerability.

“Executives or people who have the decision-making power, they think they cannot show vulnerability because it will be a show of weakness,” Henry said.  “[…] Our mission is setting the table for genuine connections. And I say that because I can set the table, I can’t make you eat. I can give you all the training and all the foundation for people to opt in but if you choose to sit there and say, ‘I've heard it all before’ we’re just going to go back to what we were doing.”

There is more power in daily conversations than in datapoints

At Coca-Cola, the most meaningful interactions around diversity and inclusion were not the statistics and data around diversity milestones met, but rather the everyday, honest conversations that coworkers were able to have with one another.

“We conducted listening sessions in small group sessions comprised of every ethnicity and gender-- everybody had a seat at the table,” Cabral said. “It was confidential. You can say anything—things you’d only say to your family or friends. And it was one of the most powerful moments in the company. […] Afterward, I had a [colleague who] said, ‘I'm 52 years old, and I've never had a conversation about race with a Black person in my life, so I have a lot of questions.”

Compensate people for their equity expertise

One of the less commonly spoken about topics around diversity is how to properly compensate people of color for their expertise. Volunteering or recommending Black leaders to an employee resource group or asking them to speak on a panel about diversity over and over again is work outside of their regular job description. So, it’s important to ask the question, “should that work be compensated?”

While the topic is not always easy to discuss, Tanika Cabral said that her answer to ‘can you speak on this topic/panel/help with this ERG?’ her answer has always been, “Yes, and…” as in “yes, I will work on this, but you need to allow me to bring in a team of people. The work should not be on my shoulders alone.”