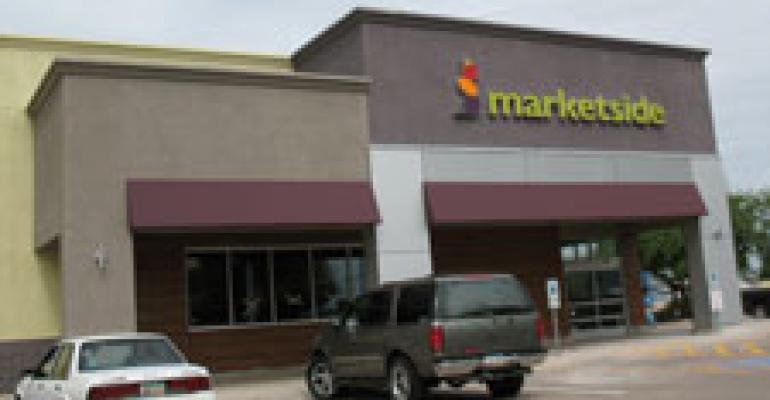 MESA Ariz. Wal-Mart Stores Inc. is planning to launch a new retailing concept that will feature a variety of bargain-priced “easy meal solutions” as well as selected grocery items.

The first four Marketside outlets are slated to open here and in nearby areas. A website for the venture, www.marketside.com, said, shoppers “will find a wide selection of complete meal solutions, fresh ingredients and everyday favorites at affordable prices all in one easy-to-shop store. With us, you¹ll never have to compromise quality to get a lower cost.”

The Marketside concept will not carry the Wal-Mart name. Wal-Mart operates some 3,400 big-box discount stores in the United States.

The Marketside stores, featuring green lettering, purple facades and natural wood finishes, will cover about 15,000 square feet, according to published reports. Wal-Mart officially said it has no immediate plans to expand the concept beyond the drug-store conversions that are currently underway in the Phoenix suburbs of Chandler, Gilbert, Mesa and Tempe. However, the Financial Times said other sites had been bought for ground-up Marketside stores.

Wal-Mart inadvertently said in some job postings for the new concept that more than 1,000 locations were already planned and forecast to generate more than $10 billion in annual revenue. Wal-Mart's total revenue is expected to top $400 billion this year.

The retailer generated foodservice sales of $375 million in the year ended January 2008, according to research by Nation’s Restaurant News.

Walmart's also attempted to develop a smaller, more locally focused concept with the introduction of Wal-Mart Neighborhood Markets in 1998.