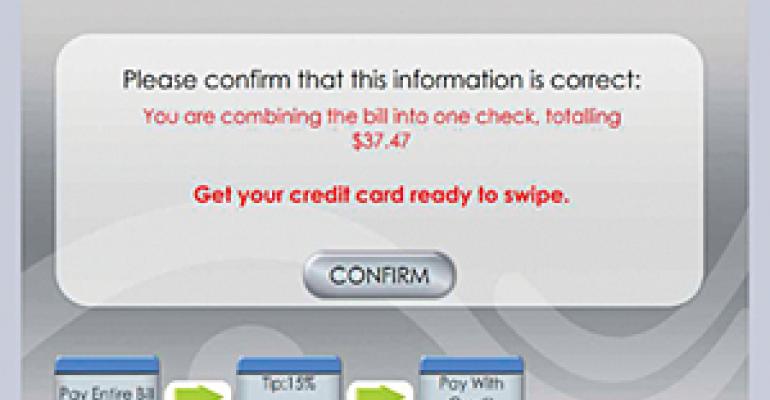 VAN NUYS Calif. uWink Inc., the Nolan Bushnell-led company with an "interactive restaurant" that notched first-year revenue of better than $2.2 million, said it added pay-at-the-table functionality to its technology enabling seated guests to place their own orders via touchscreen and was preparing to market its software.

uWink also said that its prototype Woodland Hills, Calif., restaurant now has proprietary software supporting a real-time, multiplayer game platform for head-to-head and team competition among guests. And to help monetize such games and others, the restaurant and digital media development company said it had deployed proprietary "micro-transaction" software that lets it sell "credits" for gaming purposes and enables guests to redeem or carry those credits over to subsequent visits.

"The early interest has been huge," uWink chief executive Bushnell said of third-party inquiries about the technology created by his publicly held, Van Nuys-based company. "The monetizing of our software was not part of our original plan. We were just going to be a restaurant company, but you have to listen to your [potential] customers."

Bushnell said uWink's plan to develop proprietary restaurants alone, in joint ventures or through franchising, should not be altered significantly by its new technology supply venture, which entails a co-development and co-marketing agreement with Toronto-based Volanté Systems. "The only possible difference is that we will be putting some resources into the marketing of this technology," remarked the entrepreneur, who is widely known as the founder of pioneering video gamemaker Atari and the Chuck E. Cheese's pizza chain.

Related to restaurant development, uWink anticipates second quarter 2008 openings for new branches in Hollywood and Mountain View, Calif., according to Alissa Tappan, vice president of marketing and public relations. The company previously said that other new restaurants are in various stages of planning or development, including units in Los Angeles and Dallas, that it had found a joint-venture partner for Canadian outlets and that it expected an area development agreement to yield three franchised Miami locations.

When uV Hospitality comes on the market, buyers will have the option to pick and choose modules as they see fit, Bushnell said. Some buyers might select the entire package, he explained, while others might only want the entertainment delivery system and uWink's catalog of games or the pay-at-table system.

Bushnell's history with Atari and Chuck E. Cheese's and his idea of introducing guest self-service and digital media entertainment into a casual-dining environment — complete with contemporary upscale menu and bar — has substantially raised the visibility of uWink. The business is being watched closely by some in the industry who wonder if such an approach might not put some life back into the gigantic, but recently anemic, casual-dining segment while reducing growing pressure on human resources and increasing the one-to-one connection with patrons.

The announcement by uWink that it has developed pay-at-table technology also is likely to attract some attention. Several independent restaurants and multiunit foodservice companies, including Hooters of America and Cara Operations Ltd., now are exploring or deploying such technology to give guests more control over their dining experience and allay their fears of possible card fraud or identity theft.

uWink said its graphically oriented technology walks guests through the check closing process, permits them to swipe their own cards through tabletop readers and even lets them sign their names on their touchscreens. The system can email transaction receipts and is fully integrated with uWink's electronic card processing gateway and point-of-sale system, allowing for secure transaction processing and direct capture of transaction data in uWink's accounting and reporting systems, the company explained.

In a recent presentation, uWink officials said the 5,000-square-foot, 224-seat Woodland Hills restaurant generates $500 in revenue per square foot, suggesting calendar 2007 revenue of about $2.5 million. Reports filed with the U.S. Securities & Exchange Commission indicated that the operation in the Westfield Promenade Shopping Center realized sales of about $2.19 million in its first 50 weeks of business, ended Oct. 2, and had cost of sales of about 31.11 percent during that period.

The cost of sales in Woodland Hills in the most recent complete fiscal quarter, ended Oct. 2, represented 28.4 percent of sales, reflecting higher sales and refinements to operations. Company officials have said that they expect that cost of sales percentage to drop into the 25-percent to 27-percent range once the menu has been fully tweaked and revenue from games reaches targeted levels.

Bushnell said alcoholic beverage sales in Woodland Hills are running about 20 percent of total sales, and "that's been a bit of a disappointment," as the company expected such sales to be in the 25-percent to 28-percent range. He said the suburban mall location might be a contributing factor and added that he anticipates a stronger bar business at future sites in more urban areas.

The uWink concept features a mix of free and fee-based software game options for guests. To date, revenue from fee-based play of uWink's catalog of proprietary software games represent about 6 percent of total sales, Bushnell said. He indicated that the deployment of the multiplayer platform and micro-transaction software should make it easier to hit the company's targeted game-sales number of 15 percent of the sales mix.

Multiplayer gaming has been very well received by Woodland Hills patrons, Tappan said. "uWink Trivia Live" was the first multiplayer  game title released, she said, and it permits patrons throughout the restaurant to play multiple-choice trivia games against one another, with real-time scoring projected on the walls.

"People like to compete. We've turned a mediocre Tuesday night bar business into a pretty good Tuesday night bar business," Bushnell said of guest response to multiplayer gaming and its ability to increase sales. He added that he was surprised that "people really don't need much of a prize" to be enticed into participating, as they seem to want to get involved "just for the fun of it."

Deployment of the in-restaurant multiplayer gaming platform "sets the stage for restaurant-to-restaurant game play, and we look forward to extending the platform to online game play as well," Bushnell said.

The 5,000-square-foot configuration of uWink's Woodland Hills restaurant has limited private-party business there, as Bushnell conceded, "We've had party demands we have been unable to meet." Partly in response to that limitation, the company said new restaurants will be larger, such as the Mountain View site in development, which is approximately 7,000 square feet.